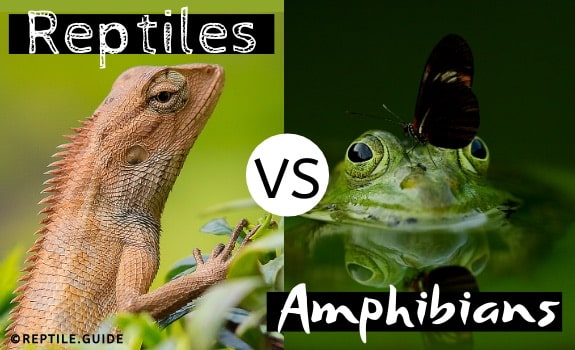 Have you ever mistakenly told someone that your favorite reptile is a frog?

You see, while reptiles and amphibians have some similarities, their differences are in fact quite distinct.

This article will outline exactly what the similarities and differences are so the next time you find yourself at trivia night you will be armed with all the facts.

The following 3 differences highlight the most significant differences between reptiles and amphibians and as such, should not be overlooked!

Perhaps the most obvious difference when it comes to reptiles vs amphibians? Skin!

You see, the skin of reptiles and amphibians are uniquely different in BOTH aesthetics and function…

Reptilian skin is covered in scales and/or scutes.

Scales are a type of watertight skin that allows them to live on land. Scutes are boney plates found on some turtles and animals in the crocodile family.

The rough skin of a reptile helps protect them. It’s a misconception that reptiles (like snakes) are slimy. In fact, they feel dry and scaly to the touch.

Reptiles also shed their skin as they grow and continue to shed periodically throughout their adult life.

On the other hand, amphibious skin is thin, smooth, and permeable so that gases and liquids can move through it. Their skin often assists them with breathing.

Unlike reptiles, amphibians do feel wet and slimy to the touch. Their skin, like the White’s tree frog, has a mucous coating that helps keep their skin moist.

Amphibians also shed their skin and some of them, like frogs, will eat their skin as soon as they shed it.

⭐️Fun Fact: Did you know that some amphibians, like Australia’s Cane toad, release a toxic poison through the mucous in their skin, which helps protect them from predators?

The respiratory system of reptiles and amphibians are quite different. How these creatures breathe is also a clue for how and where they live.

Reptiles have fully developed lungs. Some reptiles have mechanisms that assist in their breathing. For example, aquatic turtles have more permeable skin, similar to amphibians, but they still rely on their lungs to breathe.

The breathing patterns of turtles are unique and a topic of ongoing study. Some of them do not breathe when their legs are retracted into their shell.

Some reptiles spend little to no time in the water, while others, like crocodiles, spend much of their time in or near water.

As such, their respiratory systems reflect their natural habitat and preferred environments.

Amphibians start their lives as tadpoles where they live underwater and use gills to breathe. As they grow, they develop basic lungs that are not as fully developed as that of reptiles.

This is because their skin is also a respiratory organ. Gases like oxygen are able to pass through their permeable skin and into their capillaries.

Most amphibians live in warm, damp climates but they do not have to live exclusively in water. They usually live partly in water and partly on land, calling wetlands or forests home.

However, species like the Pixie Frog are unique because they do not rely on water as much as their amphibian counterparts.

They can stay moist from living in a high humidity location, but some have adapted to life further from the water by developing a waxy coating to protect their fragile skin.

⭐️Fun Fact: Have you ever heard of the rare and endangered Tuatara? This is a reptile that lives exclusively in New Zealand. It is unique because its brain and how it moves are more similar to an amphibian instead of that of their own species.

Another key distinction in the reptiles vs amphibians conversation is that of reproduction. You see, reptiles and amphibians both start their lives from eggs, but the rest of how they reproduce is distinctly different…

The process of how reptilian eggs are fertilized is similar to mammals. The male’s sperm is placed inside the female’s body. The process varies between species, but it is always done internally.

Some reptile females (like the bearded dragon) will then leave an egg clutch hidden somewhere on dry land. Meanwhile, while others keep the fertilized eggs inside their body until they are ready to hatch.

There are, however, a number of snakes who don’t lay eggs at all and instead give live birth (just like mammals!).

The Diamondback water snake is an excellent example of this, but I digress.

Reptile eggs are dry and leathery and usually left in a warm, dark, and damp location.

Behavior can vary as some reptiles will abandon the clutch, others stay nearby to protect it, and still, others actively take part in controlling the eggs’ environment (warmth, safety, etc.).

Amphibian fertilization can be done either inside or outside the female’s body. If it’s externally, the female will release the eggs and the male will swim by and release the sperm.

The eggs of all amphibians are laid in water to keep them moist and are coated in a gelatinous substance that further protects them.

⭐️Fun Fact: Near Indonesia there is a fanged frog species called Limnonectes larvaepartus, which breaks the rules and gives live birth to tadpoles, skipping the egg-laying stage.

Now that you are well aware of the key differences between reptiles and amphibians, let’s discuss the core ways in which they are similar!

Reptiles and amphibians both get their heat from the ambient environment. Some people call this “cold-blooded” but that’s not the correct term. Instead, you can refer to them both as ectothermic creatures.

Both reptiles and amphibians need to be kept warm, which is why heat lamps and heating pads are crucial in home habitats.

When both reptiles and amphibians get too cold, they slow down, making them susceptible to predators.

Both reptiles and amphibians are some of the oldest species on earth, having originated over 300 million years ago!

Neither reptiles nor amphibians have an aggressive defense system.

Instead, they usually rely on camouflage, playing dead, or using mimicry – a mechanism where they display a warning symbol, color, or behavior to intimidate a threat.

Toxic chemicals, inflating the body, and biting are final lines of defense.

Wrapping Up Reptiles VS Amphibians

Now, you should have a clearer understanding of reptiles vs amphibians. So, snake and lizard shaped creatures are reptiles and everything else is an amphibian, right? Not so fast!

If you bring to mind a picture of the lizard shaped salamander or the serpentine shaped caecilian (both amphibians) you’ll realize it’s not exactly that simple.

And axolotls are interesting descendants of the tiger salamander who—despite developing lungs—remain fully aquatic for the entirety of their lives.

They’re quite popular as pets, so check out our baby axolotl or black axolotl care guides to learn more!

Itching to learn more about reptiles & amphibians? Check out these books!