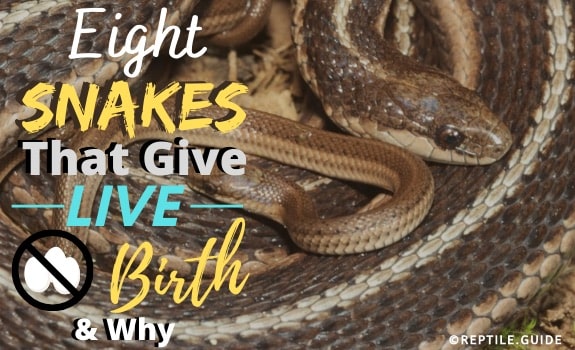 Did you know that not all snakes lay eggs?

Most snake species do lay eggs, so it is a common assumption to make. When most people imagine snake reproduction, they probably imagine a gravid (pregnant) snake laying her eggs in a burrow or nest, then slithering off and continuing with her life.

While this is usually the case, there are certainly some exceptions…

Species, such as pythons, provide extra warmth and protection to their eggs while they incubate. Meanwhile, Vipers are known to protect their young after they are born until their first shedding.

On the other hand, King cobras even build an elaborate nest for their eggs and guard them fiercely!

There’s also a large handful of species of snake that give birth to live neonates (newborns), just like most mammals!

Simply put? There is more than one biological process for a snake to bear live offspring.

Let’s dig deeper into these fascinating modes of reproduction…

Oviparous snakes and other animal species lay eggs which incubate in the environment and then hatch.

Most colubrids, such as king snakes and corn snakes, most elapids, like cobras, as well as birds, are classified as oviparous. Other reptiles such as the Blue-Tongue Skink and Red-Eyed Crocodile Skink also give live birth.

Laying a clutch of eggs reduced the burden on the maternal animal; she was able to lay her eggs and get back to the hard work of survival.

Species that have developed excellent defensive capabilities, such as immense size or venom, evolved the instinct to protect their eggs.

This lets them live the best of both worlds. They do not need to nourish and carry their young internally, but they’re still able to give them the best chance at survival by guarding the nest.

⭐️ Fun Fact: Did you know? The earliest snakes species were ALL oviparous, which makes sense when you consider the environmental risks they faced from predators before evolution had a chance to equip them with defense mechanisms.

Viviparous snakes and other animal species, develop their offspring internally, providing nutrients via the placenta and yolk sack.

When the embryos are finished growing, they are born alive in a membrane.

It’s only recently been confirmed that some snake species are fully viviparous and not, in fact, ovoviviparous.

Mammals are the most well-known viviparous reproducers, with requiem sharks and some of the snakes that we will learn about below being the exceptions.

Ovoviviparous snakes and other animal species, reproduce in the middle ground between viviparous and oviparous.

The embryos do develop in an egg, but that egg is incubated and hatches internally, inside the mother’s body. The mother then gives live birth.

Snakes evolved viviparous and ovoviviparous means of reproduction when the risk of predation was lower for the mother than for a clutch of eggs.

Rattlesnakes are an excellent example of this – they can defend themselves with their venom, so the mothers are relatively safe to carry their offspring.

Aquatic snakes, arboreal snakes, and snakes living in cold climates also evolved to be live-bearing to give their progeny a better chance at surviving.

Breeds of Snakes the Give Live Birth

Now that you have a keen understanding of the difference between live bearing female snakes and those that lay a clutch of eggs, let’s dive into discussing the various different viviparous breeds! 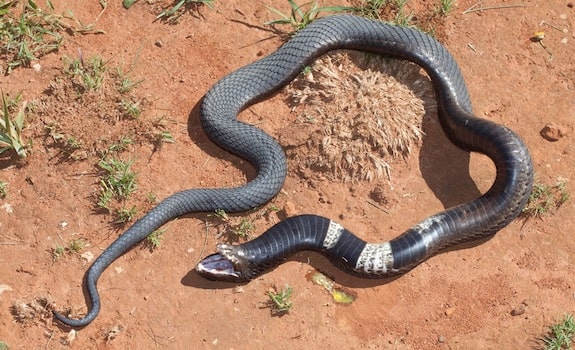 Rinkhals, also known as ring-necked spitting cobras, are ovoviviparous. They are closely related to true cobras, but all true cobras lay eggs – they are oviparous.

They likely developed this reproductive method thanks to their excellent self-defense mechanism. Any would-be predators that have experienced their wrath will know to give a gravid female a wide berth. 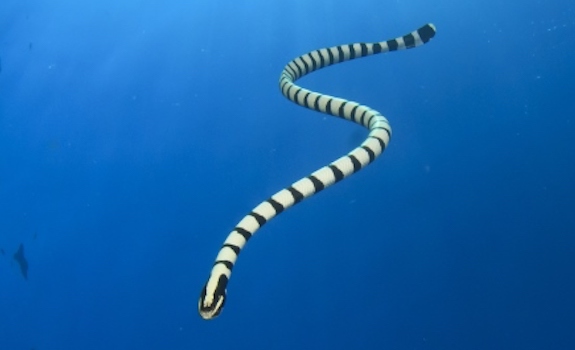 Sea snakes belong to the family Elapidae. Most species of snakes in the Elapidae family (known as “elapids”) lay eggs. Other popular elapids include cobras, adders, and mambas.

Almost every species of sea snake has evolved to give live birth because they rarely or never visit the land. Snake eggs cannot develop and incubate underwater.

The only genus of sea snake that lays eggs is sea kraits. They leave the ocean to digest their food, mate and lay eggs. 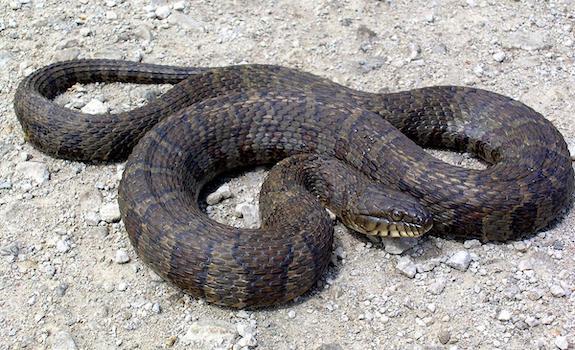 Colubrids are a large family of snakes that includes well-known species like rat snakes and garter snakes. Most colubrids lay eggs. However, Water Snakes, in the genus Nerodia, are some of the few colubrids that are live-bearing.

They are viviparous, meaning their offspring develop internally without an egg, and are given nutrients via the placenta and/or yolk sac.

Water snakes likely evolved to give live birth because they live in such wet habitats, like swamps, that it would be difficult and risky to find a dry enough area to lay eggs.

Snake eggshells are thin, so the embryos can easily drown if the area floods. Water snakes spend most of their lives in freshwater.

Garter snakes are another genus of  live bearing snake that gives birth to live young. They also belong to the colubrid family. In fact, they are ovoviviparous reproducers.

The reproductive cycle for garter snakes is fascinating from start to finish.

Mating season videos have gone viral due to the swarms of males that may be attracted to a single female, creating a massive breeding ball with up to twenty-five males per female!

The females are also able to store sperm for years before using them to fertilize their eggs during a time when the living conditions are ideal.

Mothers typically give birth to three to eighty neonates, and the duration of the pregnancy is usually two to three months. 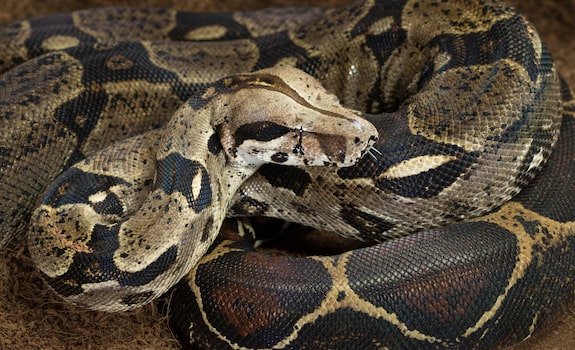 Boa constrictors are viviparous. Their offspring develop inside the mother for around four to five months, then she gives birth to a litter of ten to sixty-five neonates.

However, unlike some of the other species, it is unknown why boa constrictors evolved to give live birth. It likely has something to do with the type of environment their ancestors lived in. 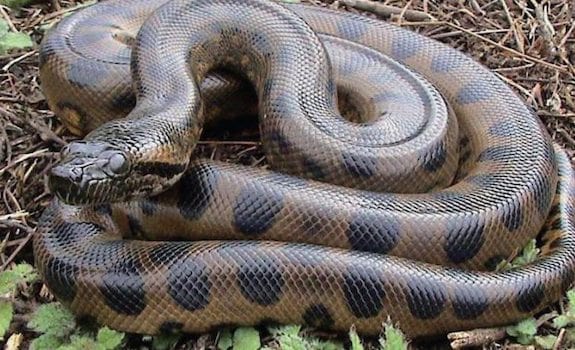 They are considered viviparous, like their boa constrictor cousins. In fact, ALL snake species in the Boidae (boid, boas) family are viviparous. This includes rubber boas, sand boas, and rosy boas, to name a few.

This trait likely developed due to the behavior and environment of their predecessors.

⭐️ Fun Fact: Giving birth to live neonates is also useful to anacondas due to their aquatic nature and their colossal size keeps most predators away. Most birds and other opportunistic critters would love to snack on a platter of defenseless anaconda eggs but would think twice about messing with a gravid (pregnant) fifteen-foot mother! 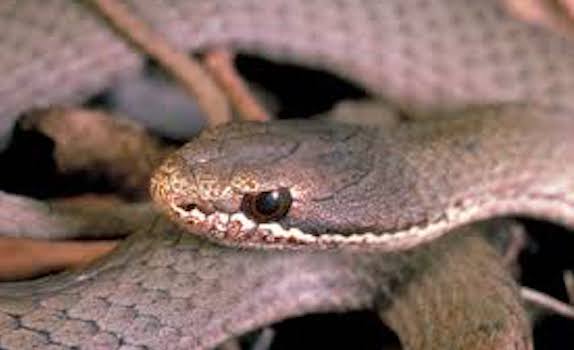 White-lipped snakes are a small species of elapid snake. They are known to have a temper so keeping one as a pet should be reserved for experienced reptile owners only. But there are other small snake species which are more beginner-friendly.

White-lipped snakes are viviparous and likely evolved to bear live young due to the frigid climate in which they live.

Gravid snakes can bask in the sun during the day, achieving a much higher temperature than a nest under leaf litter or earth would be able to attain. 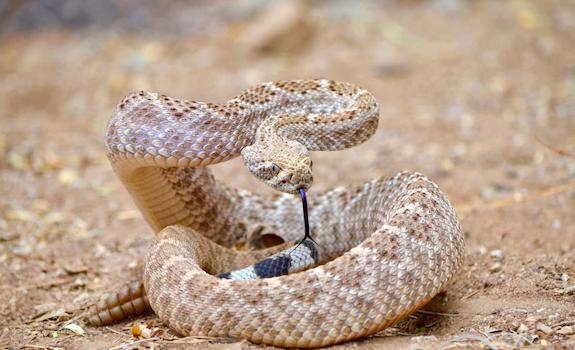 There are dozens of rattlesnake species, and all of them give live birth.

They are ovoviviparous, meaning the mother incubates the eggs in her body. This mode of reproduction was likely developed because rattlesnakes have an excellent form of self-defense – their venom.

Not very many predators want to mess with a momma rattlesnake, so the eggs are much safer developing inside her than in a nest. 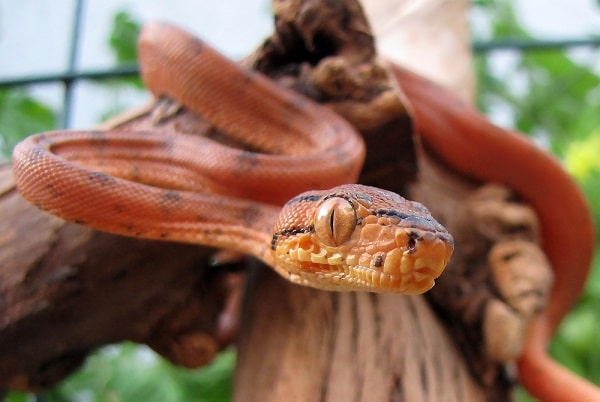 The former is found in the Amazon and Brazil’s South-eastern corner, while the later lives farther north in south Central American and countries like Colombia and Venezuela.

Their gestation period is a whopping 6 to 8 months! After this, the female will give birth to live young who are independent of their mother. 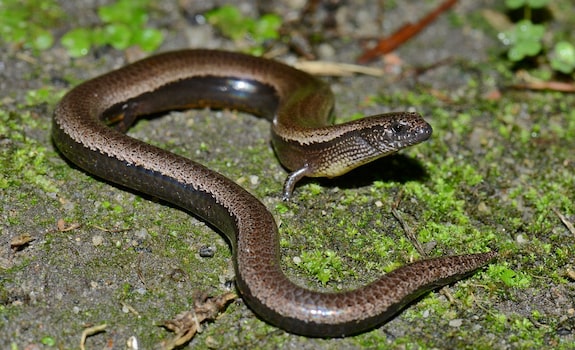 Admittedly, this animal is not a snake, but skinks are very closely related to snakes!

There are a small handful of species that are known to give live birth or lay eggs depending on their locality and the conditions.

Interesting enough, the three-toed skink recently displayed the first known case of an animal laying eggs and giving live birth from a single pregnancy. So cool!

As you can see above, there is a vast range of species that have evolved to give live birth for different reasons. There are ovoviviparous or viviparous snakes from almost every family and genus, from colubrids to boids to elapids.

When snakes and other reptiles first began to evolve, they were all egg layers.

The bottom line? Snakes that give live birth offer their offspring a better survival rate.

Currently, only approximately 20-30% of snake species give birth to live young.

Wrapping Up Snakes That Give Live Birth

I hope that this article helped you learn more about the reproduction of some familiar types of snake, in addition to discovering completely new species that you were unaware of.

Each of these snakes is a real-life example of evolution at its finest. They’re also all the perfect showcase of survival of the fittest.

After all, a gravid snake is usually more fit to survive than a helpless embryo developing on its own in a soft, leathery egg.

The Diamondback Water Snake is another species that gives live birth. But we didn’t delve into it here, because it has its own dedicated article.

Now that you are equipped with a healthy dose of knowledge about snakes that give live birth, I’d like to encourage you to learn more about other species that reproduce a little differently than you might expect – frogs that give birth from their back, pregnant seahorse dads, live-bearing lizards, egg-laying mammals, and more.

Nature sure is unpredictable, but that’s simply a part of its fascination!

9 thoughts on “8 Snakes That Give Live Birth Like Mammals & Why (With Pictures!)”