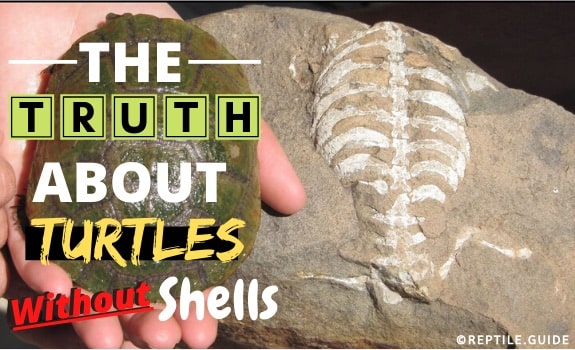 Turtles and tortoises absolutely would not live without their shell. Their shell is, functionally, both their rib cage, and their skin. No vertebrate animal would be able to survive without these parts of their anatomy.

It would be easy to assume otherwise, however. Hermit crabs are popular pets that are well-known for crawling right out of an old shell and into a new one when they outgrow it.

The difference, however, is that the hermit crab’s shell is not attached to his body. In fact, their bodies don’t even make those shells. Hermit crabs borrow the empty shells of other expired invertebrates.

In addition to the shell’s function as a Testudines’ (turtles and tortoises) skeleton and skin, shells serve as a form of physical protection from potential predators and play an integral role in the animal’s sunbathing habits.

Most turtles don’t have many other defense mechanisms, so they would not be able to avoid becoming another animal’s meal for very long without their shell (more on this later).

Now you know whether or not a turtle would be able to live without their shell. Are you still itching to learn more about this vital and unique anatomical structure? Keep reading.

As we mentioned above, the turtle’s shell serves as a part of their skeleton. The ribcage and spine are fused with the carapace (top portion of the shell).

The plastron (bottom portion of the shell) consists of unique bones comparable to the sternum and clavicles of other four-limbed animals, and inscriptional ribs in crocodilians.

The shoulder blades are located within the ribcage of a chelonian (turtle or tortoise), which is a marked difference from most other vertebrates. The rest of the bones are located underneath the skin in the turtle’s limbs and head, as you would expect.

Calcium deficiency and vitamin D deficiency will directly affect the health and growth of a turtle’s shell, just like it affects the bone health of other animals without shells.

⭐️Fun Fact: A cracked or broken turtle shell can be the equivalent to having broken ribs and a large gash in your skin.

Finally, just like we can have prosthetic limbs and joints, veterinarians have recently had success with giving a burned tortoise a 3D-printed prosthetic carapace. 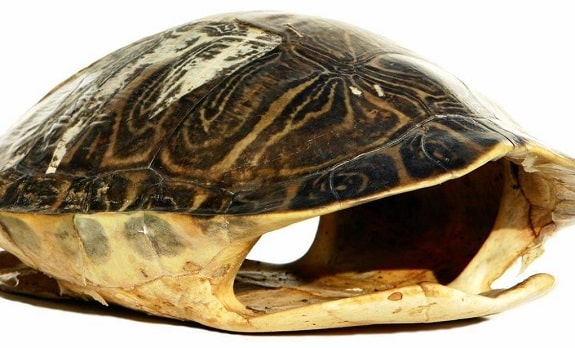 The complicated structure and components of a turtle’s shell can be difficult to understand, but shells include bones, skin, and unique anatomical structures that fall somewhere between the two.

The bones of a turtle are fused to structures called dermal plates, which are essentially hardened skin that resembles bone. Covering the dermal plates is a layer of vascular skin, and usually covering that is a turtle’s scutes.

A turtle’s scutes are made of keratin, the same sturdy material that your fingernails consist of. Scutes protect the delicate and sensitive skin and dermal plates below from scrapes and bruises.

Scutes are typically arranged to overlap the sutures (areas between) the dermal plates and other bones, rather than align with them. This is for additional stability.

Chelonian shell anatomy can vary significantly from species to species, so none of this is true for every animal. Case in point, softshell turtles, leatherback sea turtles, and some other species do not have the keratinous skin known as scutes.

Their bones are covered with leathery skin, which is believed to help them glide through the water effortlessly.

⭐️Fun Fact: Did you know there are seven surprising differences between turtles and tortoises?

To further showcase the similarities between traditional skin and the turtle shell’s skin, the scutes on some turtles will also shed as the animal grows.

Pet turtles are even known to use rough surfaces in their enclosure to itch their carapace. How cute!

Without the skin of a turtle’s shell, its nerve endings and fragile dermal plates would become exposed to bacteria and trauma.

Reason #3: It’s Their Self Defense

One of the most well-known purposes of a turtle’s shell is as a means of self-defense.

Some turtle species can bring their carapace and plastron together, completely enclosing the vulnerable parts of their body – their head, limbs, and tail. Other species aren’t able to retract into their shell, but their bony shell still offers more defense than the soft and fleshy skin of other potential prey in the area.

Turtle shells evolved to compensate for the other anatomical changes that took place to help their early ancestors be excellent diggers.

Their ribs naturally broaden and flattened over time as a means to add strength and stability to their forelimbs, but this impaired their ability to move quickly and flee.

Since these prehistoric species couldn’t escape, their unique rib anatomy eventually evolved into full-fledged, armored shells to protect them instead.

Almost every species has a means of surviving predators, whether it is thick skin, speediness, or camouflage.

Just like our cavemen ancestors wouldn’t have been able to survive if they couldn’t avoid being eaten by predators, this is another reason why a turtle wouldn’t be able to survive without its shell.

Reason #4: It Helps Them Absorb Heat

A turtle’s shell’s (usually) dark color serves as a great facilitator of heat absorption in the sun. On the flip side, shells also protect their insides from quickly overheating and dehydrating in direct sunlight.

Even if the exposure to bacteria, viruses, fungus, and trauma did not cause the demise of a turtle without its shell, its internal organs would dehydrate in the sunlight before the animal could absorb enough heat for its body to function properly. This is another reason why a turtle wouldn’t be able to survive without its shell.

Did you know that you can make a turtle sick just by painting its shell?

That’s right. Since a turtle’s shell is partially made up of skin, it is vital in absorbing UV light rays, and synthesizing vitamin D.

Vitamin D deficiency interferes with calcium levels in the animal’s body, causing metabolic bone disease (MBD). This was such a prevalent and unknown issue that Florida wildlife officials had to release an official advisory at one point.

A turtle without a shell would not have enough skin surface area to absorb sufficient amounts of UV rays, and it would face the same fate as wild turtles that were discovered, sick and dead, after having their shells covered in paint.

Even human beings that never receive any exposure to sunlight would not survive forever unless they got sufficient amounts of vitamin D3 in their diet. This is another reason why a turtle wouldn’t be able to survive without its shell.

If you imagine how a turtle or tortoise looks without its shell, you will quickly realize why it would not survive. It is the equivalent of looking into the body cavity of an animal that was opened up for dissection in a biology class.

You would be able to see all of the organs and internal structures, and they would be exposed to everything – the dry air, bacteria, predators, even falling out if the animal was flipped upside down.

However, if you were to go back 260 million years, you would be able to find the turtle’s prehistoric ancestor, Odontochelys semitestacea (toothed turtle with a half-shell). This animal is the closest visual example of how a turtle without its shell would look.

Its ribs and body had already broadened, and the lower ribs had even fused into a plastron, but it had not yet developed a carapace (top portion of the shell).

Aside from its lack of a carapace and presence of teeth, it’s believed to have looked similar to our modern-day chelonians.

A modern day turtle’s shell is essentially their identity.

Cartoons and other sources have perpetuated the myth that a turtle can come and go from its shell. The idea indeed doesn’t seem very crazy at first. Usually, skin is pliable. Bones are inside of the body. If hermit crabs can ditch their shells, then why not turtles and tortoises?

Most people are aware that turtles hide from predators in their shell, but the shell has so many other vital functions.

While we all know their shells, few people know the sounds turtles make – read on and learn more!