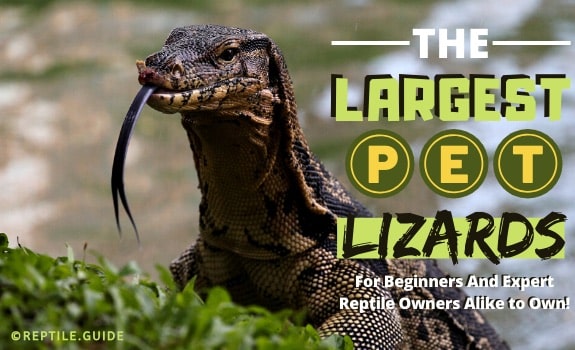 Lizards are fantastic pets for many people. They are intriguing and give insight into the world of cold-blooded animals. But, what if you’re interested in not just any old lizard… but the largest pet lizards you can possibly own?

Fortunately, once you learn about their proper care and habitat set-up, even the largest pet lizards become pretty easy to care for. Just make sure you respect their power!

You see, their ability to cause damage is what makes the large lizards more complicated to care for than their smaller counterparts. This strength and size gives them an incredible “WOW” factor. And this is especially when they take up an entire wall or room in your house!

But, with all of this being said… they are certainly NOT not for everyone, as you’ll soon discover.

Now, before diving into the specific big lizard pets, it is important to first note that the most commonly owned types of large lizards fall into one of two categories: monitors and iguanas.

Below are lists of monitors and iguanas that are often found in people’s homes as well as a bonus lizard species that falls into this category. It is also important to note that large lizards should generally be kept by experienced owners only.

The following recommendations will all include variations of the Monitor Lizard (opens in new tab).

And in order to prevent redundancy, here are some things to keep in mind that ALL monitors need: 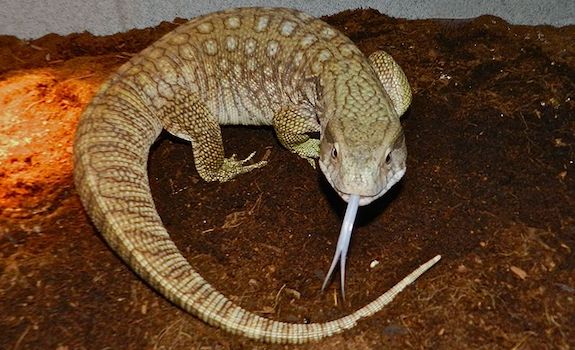 The Savannah monitor, also called a Bosc monitor, is considered to be a medium sized lizard in the category of big lizard pets. Its appearance is interesting because it looks more like a large tegu than the other lizards in the monitor family. Despite its chill looks, this lizard can be a handful.

The Savannah monitor grows to be over three feet long and needs an expansive habit to handle its size and energy levels.

As its name implies, it comes from a dry, arid, desert landscape so the home enclosure MUST mimic its natural environment.

Typically the habitat should be six feet in every direction. It isn’t uncommon to find owners dedicate a room in their house to this reptile’s care.

They are active predators in the wild and are constantly exploring and moving. Savannah monitors also love to dig and will need heavy, deep soil substrate that is contained and won’t collapse in on them.

They are capable of becoming friendly, but this is NOT their natural temperament. As such, they need an experienced handler to manage their behavior.

Their bites can be aggressive and painful, often needing stitches. With diligence, they can be trained to use a harness, but not all Savannah monitors have the personality for this level of training.

The right Savannah monitor can be a wonderful pet with the right handler, but too often they are relinquished to a rescue because they are unmanageable. 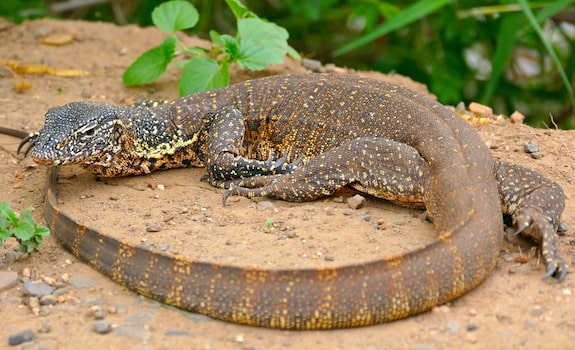 The Nile monitor is the largest of all the African lizards, weighing 45 pounds at maturity and reaching five feet in length.

They are quite active when they are young, loving to climb and move, but unlike the Savannah monitor, this does slow down slightly as they get older.

Nile monitors do not have the easiest temperaments.

Even a well-handled, well-trained Nile monitor can cause serious damage, sending you to the emergency room for stitches on a somewhat regular basis just from attempting to hold it.

They have massive, sharp claws, but that is not their only weapon. They have a lot of razor-sharp teeth and will whip you with their tail.

The experienced reptile owner will purchase a captive-bred Nile monitor and handle it constantly its entire life. Even with this dedication, you are at the mercy of their temperament.

Nile monitors need to eat almost constantly. They are very athletic and move quickly, burning calories to move their large bodies around their habitat. 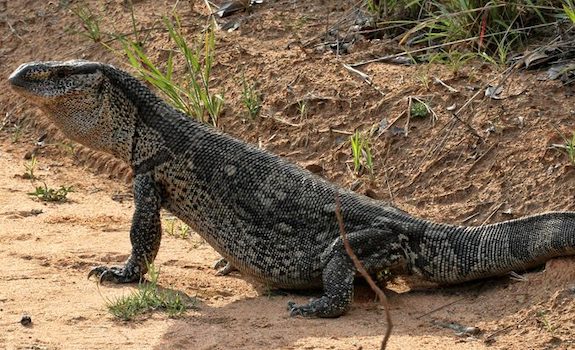 Of the big lizards, this is a better choice giant lizard for lizard owners with limited experience.

The Black-throat monitor is huge, bigger than the Savannah monitor, weighing between 50 and 60 pounds and can grow up to six feet in length.

The Black-throat lizards have an excellent personality, but they are still capable of causing damage. Usually, this will be accidental as they might cut you trying to climb onto you.

If you get their diet and habitat right, and handle it constantly, the Black-throat lizard will likely thrive and not show aggressive behavior. 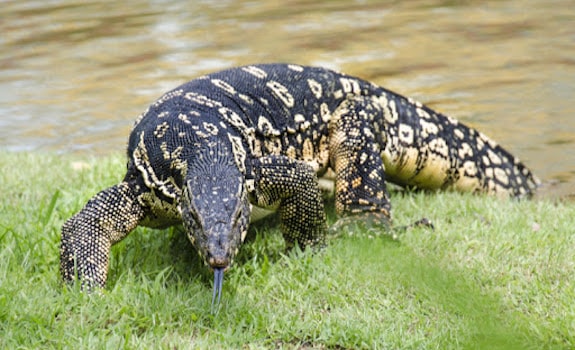 If you’re looking for the best big lizard pets that you can actually bond and play with, look no further than the Asian Water Monitor.

As far as temperaments go, the Asian Water Monitor surpasses all the other giant monitors. They are playful and curious.

However, while they still have the potential to harm, it is unlikely they would intentionally hurt you.

In addition to a fantastic personality, Asian Water monitors are VERY intelligent. This allows them to be more trainable than you might expect.

You may also bond better with the Asian Water monitor because of their intelligence and their ability to interact with humans.

They live longer than many of their monitor counterparts. In fact, they will live an average of 15 years in captivity but are known to reach 20 years!

Adults need an enclosure that is at least 8-feet by 6-feet by 8-feet, but they can start with a smaller enclosure that grows with them as they mature.

Now that we’ve adequately covered the best options for the largest pet lizards from the monitors species, let’s dive into iguanas!

Like above, in order to prevent redundancy, here are some things to keep in mind that ALL iguanas need: 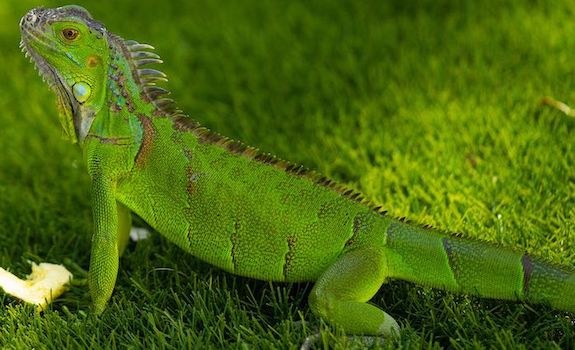 The Green Iguana is perhaps the MOST familiar iguana in the large reptile family. Its vibrant color has made them one of the most popular reptiles available for purchase. This is not necessarily a good thing…

You see, depending on who you ask, Green Iguanas are either one of the worst reptiles compared to other reptiles to keep OR they aren’t so bad as long as you have the right habitat conditions.

Some of the variations in reports on Green iguanas comes down to their personalities. Green iguanas can be somewhat docile, but they can also be aggressive.

An aggressive Green iguana can easily send its caretaker to the emergency room especially if it clamps their teeth into them and uses predatory tactics like the death role.

Caretakers have lost fingers this way. The temperament of the Green Iguana can vary depending on their age, sex, and stage of development.

For instance, it isn’t uncommon for a juvenile, male green iguana to start out incredibly docile and friendly but become aggressive and never return to its friendly state as it matures.

The habitat of the Green iguana is like any other giant lizard… LARGE! It needs plenty of space to move and climb and the right heating and humidity levels.

If you’re going to have any shot of success when raising these guys, you MUST plan ahead before you even begin to consider this iguana.

🤓Expert Tip: If you’re on the hunt for a reptile for your child to care for and raise, it would be best to NOT opt for the Green Iguana. In fact, not many of the suggestions in this list are child friendly. Instead, you should opt for a proven beginner friendly lizard instead that will be easier to care for and handle. 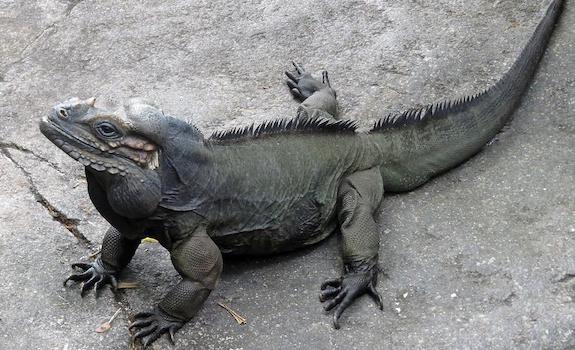 Rhino Iguanas range between two to four feet in length. When compared to the Green iguana, their temperaments are more placid and consistent.

They might go through a squirrely phase in adolescence but that usually levels out as they reach adulthood.

They can live up to 20 years in captivity. This means you’ll have more good years with a docile Rhino iguana once you get through the temperamental early years.

However, that 20-year mark shows how much of a commitment you are in for.

Despite the easier temperament, not all Rhino Iguanas are docile nor are they right for all reptile owners…

As we know by now, these huge lizards need serious space. And the requirements to care for them, coupled with their ability to cause damage puts them in the category of “not ideal for beginners.”

However, a lizard keeper with moderate experience might consider this Rhinoceros Iguana after doing significant research and planning.

Check out our dedicated rhino iguana care sheet to learn more about what is involved in keeping one.

Alternatively, the desert iguana—due to its smaller size and more docile temperament—is a much lower-maintenance pet option!

In addition to the recommendations for the big pet lizards above, you’d be wise to consider the following two below.

You’ll find a great medium-sized option in the Ackie and a more gentle giant in that of the Tegu! 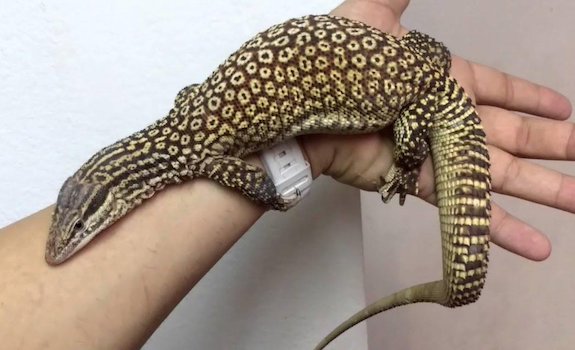 The Ackie monitor is not a giant lizard. It reaches only 28-inches in length.

However, it is one of the easiest and most pleasant monitors to keep and is considered a beginner monitor for lizard keepers.

If you are dreaming of keeping monitors, this is the one to start with despite its moderate size. 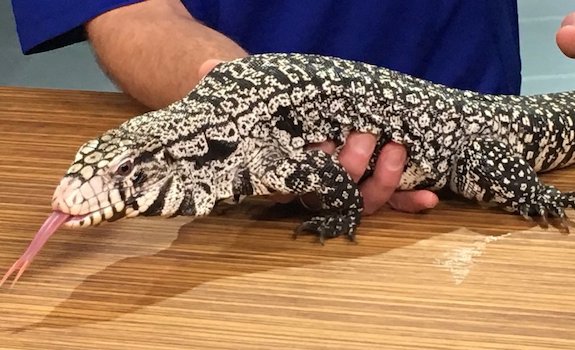 The Argentine Tegu is not a monitor nor an iguana so it gets its own category. This Tegu grows up to four feet and has a wonderful, often playful, personality.

They can live up to 20 years and are powerful and athletic. Yet, despite all that power, they are unlikely to bite.

The Argentine Tegu is an omnivore, eating a higher protein diet earlier in life and then transitioning to a higher vegetation diet.

This Tegu is trainable and it is possible to take them out on a harness with some work.

All big lizard pets are powerful and should not be purchased without careful research and planning. It is better to find out if you are a skilled lizard keeper by having easier, smaller lizards.

When you are ready you can commit a room in your house, a chunk of your budget, and several decades of your life to caring for a giant lizard.

If you do choose this path, consider starting with the Argentine Tegu or the Asian Water Monitor. Even better, get the medium-sized Ackie Monitor as your first larger lizard.

Looking for other big animals? Read about the largest crocodile ever recorded!

If you choose to get an iguana, then we recommend learning more about setting up the proper iguana cage for it.

And if you do go with an iguana in the end, you can learn more about what iguanas eat to ensure your new friend has a healthy, balanced diet.