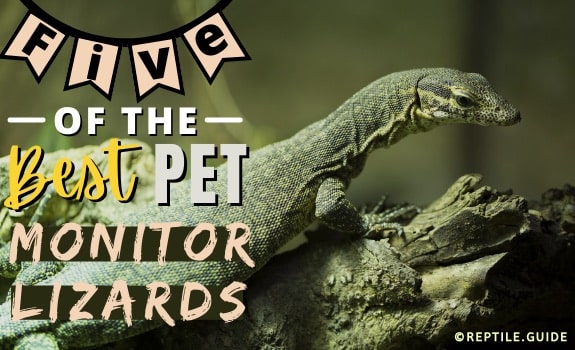 Monitor lizards have recently taken the reptile-keeping community by storm!

Viral videos featuring puppy-dog tame, giant lizards performing tricks and coming when their name is called, have captivated the hearts and minds of herp enthusiasts across the world.

Unfortunately, many of those people may one day walk into a store and make an impulse purchase so they can have their own internet viral superstar. Don’t be one of those people!

Luckily, if you’re already here, it means you’re doing your research and are on the right path to:

So, with all of this forewarning being said, keep reading to discover what you need to know about monitors as pets and their care requirements!

The fact of the matter is that the answer is: NO… monitors don’t make “good” pets for most people.

Caring for a monitor lizard requires an exceptional level of time, commitment, and finances that not every enthusiast has to offer.

As with any wild animal, owning a monitor comes with its own inherent risks. Monitors are voracious carnivores, and most of them grow large enough (opens in new tab) to inflict serious wounds that would require emergency treatment.

They’re incredibly intelligent. Time and again, studies prove that they’re not only adept problem solvers, but in actuality the MOST intelligent reptiles.

While that level of intelligence may seem appealing, it can be their (or your) downfall in captivity….

Monitors can quickly become bored, and a bored lizard is a grumpy lizard. Some keepers even surmise that they figure out our schedules, read our body language, and calculate opportunities for escape or otherwise taking advantage of negative opportunities.

Still, seasoned monitor keepers argue that – as long as you’re willing and ready to put in the work – monitor lizards are one of the most rewarding species to own and care for, reptile or not.

While we’ve picked out the best candidates for captivity, keep these critical aspects in mind: 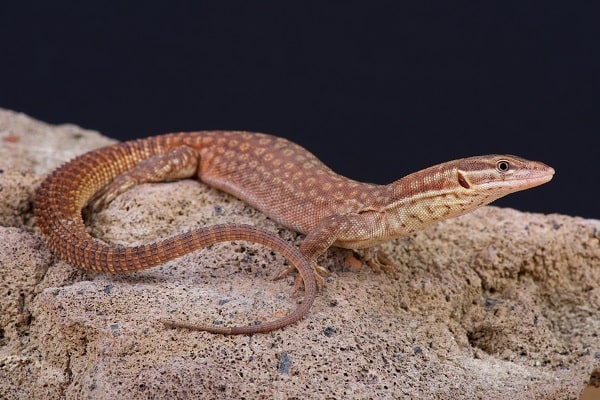 Ackie Monitors are the go-to for most first-time monitor owners.

Their small size and agreeable temperament make them suitable pets for most committed reptile keepers.

They’re less active with slower metabolisms than most other Varanid species, so it’s thought that they spend most of their time hidden in crevices waiting for prey to come to them.

They range from dark brown to bright red with off-white spots. They have long tails that account for roughly ⅔ of their total body length, small heads, and a long neck.

While bigger is usually better, this communal species can be housed as a pair in an enclosure that’s 4′ long, 2′ wide, and 2′ tall. A front-opening habitat is ideal because you look like a predator when you approach these lizards from above.

The substrate should be a mixture of sand and soil and kept at a depth of 6 inches to 2 feet.

Ackie Monitors enjoy digging if you give them a chance. They also need multiple opportunities for hiding and climbing, like rocks, caves, branches, and hollow logs.

Being native to desert-like environments, Ackie Monitors require a 150 ºF basking spot and moderate humidity levels. Their substrate should hold its shape if you poke your finger in or form a ball. If not, it’s either too dry or too wet.

They also need intense UV lighting for 12 hours per day.

Gut-loaded feeder insects should make up most of their diet, fed daily, with a vertebrate prey offered once or twice a month as a treat. Use a high-quality reptile multivitamin once or twice a week. 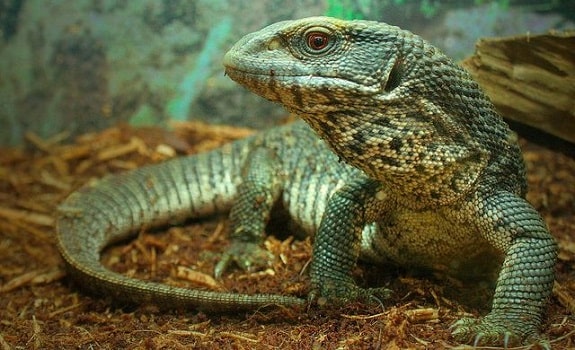 Despite their considerable size, Savannah Monitors are one of the MOST popular pet monitors. You can usually find the baby miniature-sized versions of these behemoths in reptile stores – no tracking down breeders necessary.

Unfortunately, this availability has led to the gross neglect of many impulse-purchased Savannah Monitors.

While they’re large, capable of inflicting a nasty bite, and require a colossal terrarium, the good news is that they’re one of the most friendly, mild-tempered species of monitor.

Savannah Monitors are native to Savannah’s and other habitats in Africa. They’re closely related to the ornate monitor and the infamous Nile monitor.

They’re diurnal, meaning they’re active during the day, but they seek the cool respite of burrows during the hottest parts of the day.

Savannah Monitors are stout and heavy-bodied with powerful, short limbs evolved for digging. They have shorter necks than many other Varanid species, and their heads are uniquely triangular due to their specialized jaws.

They range from a sandy-tan to dirt-brown color with lighter-colored spots.

Unfortunately, despite their popularity, experts haven’t unlocked the keys to successfully keeping Savannah Monitors in captivity.

Most animals die from dehydration at a young age or live for 3-5 years, then die, with the only symptom being obesity.

Given that most monitor lizard species live for 20 years or more and the fact that female Savannah Monitors produce only one or two clutches before they perish in captivity, it seems logical to assume that our current captive husbandry standards are lackluster at best.

If you’re looking to truly put your reptile keeping skills to the test, the Savannah Monitor might be the right lizard for you.

Wild Savannah Monitors’ diet consists mostly of mollusks, with some other insects occasionally consumed. They also experience five to six months of fasting and dehydration.

Feeding a Savannah Monitor year-round on a diet of fatty, commercial feeder insects, rodents, and processed foods is likely why they do not last long in captivity.

If you decide to take on a Savannah Monitor of your own, we suggest doing a lot of in-depth reading about their natural history in the wild so that you can do your best at replicating their natural diet and seasonal changes. 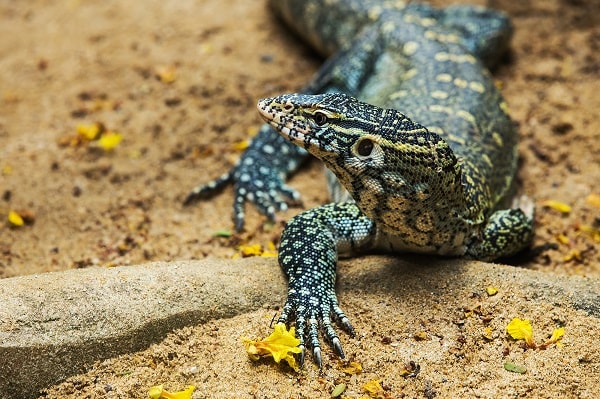 The Asian Water Monitor is another monitor lizard species that is quite popular in pet stores and captivity in general but grows too large for most casual reptile keepers to provide adequate housing and care.

This opportunistic predator thrives anywhere that there’s water thanks to its willingness to eat mammals, reptiles, birds, and even carrion. They’re almost as adept at climbing as they are at swimming, too!

This large, mighty lizard has a flattened tail to help it swim and powerful legs for scaling trees. Its scales are rough and keeled, Young Asian Water Monitors are black or dark gray with bright yellow bands and spots, but these yellow markings usually fade with age.

Asian Water Monitors require a vast, custom-built enclosure that includes a pool for swimming. They’ll use this pool for drinking and defecating, so it needs to be cleaned or heavily filtered daily. 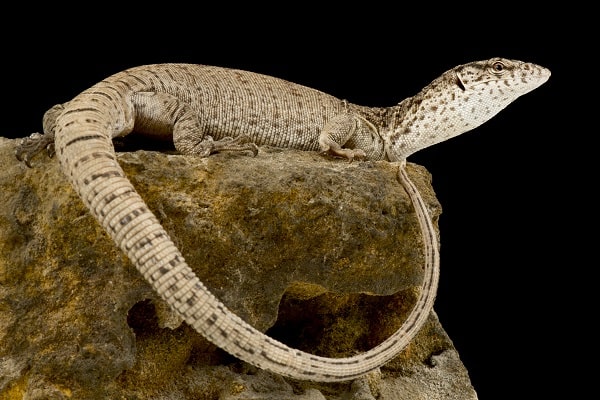 Pygmy Mulga Monitors are, unfortunately, pretty challenging to find in captivity. This is a real shame because their size and personality are perfectly suited to living life as a spoiled pet lizard!

Don’t let that discourage you, though. If you do your research and reach out, you’re bound to find one of the handful of Pygmy Mulga Monitor breeders. The waitlist may be a few years long, but the wait is worth it for this little cutie!

Keepers of Pygmy Mulga Monitors RAVE about their calm temperament and manageable size and speed. They boast that they’re the MOST docile and “least bitey” of the dwarf monitor species.

They’re also possibly one of the easiest Varanus species to care for, requiring NO additional humidity, special diet, or elaborate enclosure.

Pygmy Mulga Monitors are native to Australia’s arid sandplains, where they live their lives in Eucalyptus, Mulga, and Myall trees.

While all Pygmy Mula Monitors do enjoy climbing, it seems that they may be more vertically-inclined in the wild for the sole sake of escaping predators. Captive Pygmy Mulga Monitors are just as happy at ground level.

Equip their habitat with branches, hides, and a dry substrate like sand. They require a basking spot at around 150ºF.

Pygmy Mulga Monitors thrive on a diet of commercially-available feeder insects that are occasionally dusted with calcium and multivitamin powder.

This species does well when housed communally, although males may engage in combat during the breeding season. 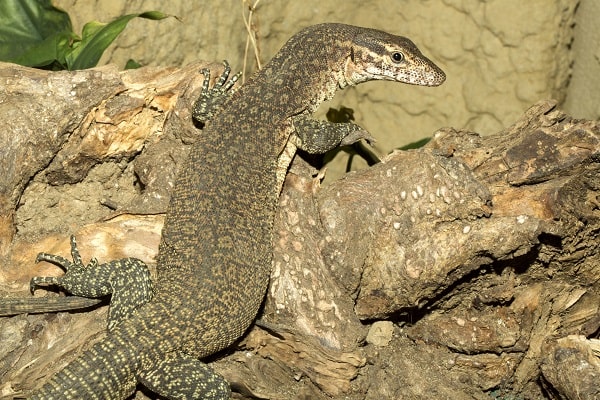 Timor Monitors are also NOT super common in captivity, but they may be easier to track down than Pygmy Mulga Monitors.

This species is perfect if you prefer to set up a tropical, jungle-like habitat. Unfortunately, they are one of the shyest species on our list. They’re better suited for observation than frequent handling.

Timor Monitors are native to the Asian island of Timor. They’re dark green or gray with bright gold or blue speckling. They spend their lives amongst high branches and tree hollows, hunting for insects and other small lizards.

A captive Timor Monitor’s habitat should be equipped with numerous branches, real or artificial vines, cork tubes, and any other climbing apparatus you can devise.

We can not emphasize the importance of hiding opportunities enough – Timor Monitors are very, very shy and will stress out if exposed.

This species also enjoys an occasional soak, so they require a reasonably sized water dish.

The substrate can be anything that is moisture-friendly: organic topsoil, coconut coir, coconut husk, and cypress mulch are common choices.

Being native to the jungle instead of the desert, Timor Monitors require a modest basking temperature of 120ºF.

The humidity will need to be maintained above 80% with a fogging system, misting system, or manual misting up to three times a day.

Captive Timor Monitors can be fed a diet of primarily insects, with the occasional pinkie mouse as a treat. Be sure to monitor their intake and body condition, as they’re prone to obesity.