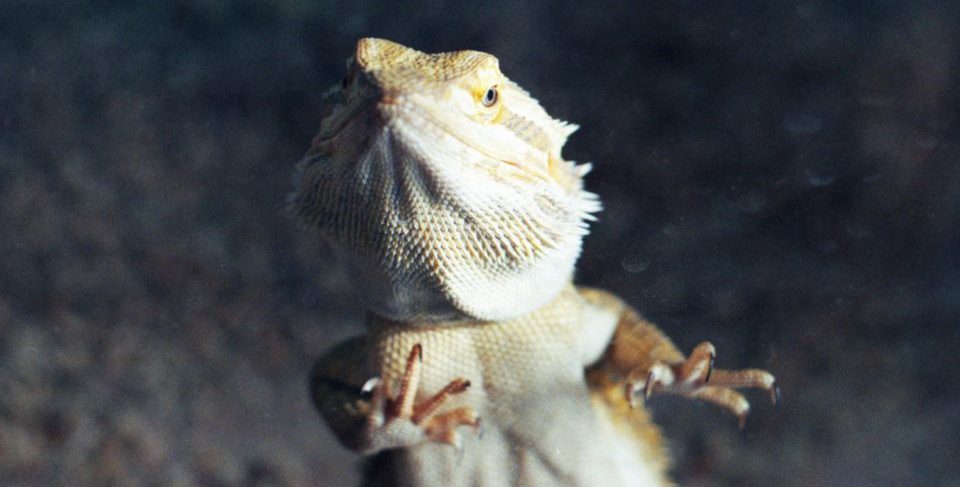 Seeing a bearded dragon scratch the glass (aka glass surfing) for the first time could be amusing or even leave you feeling confused.

Could they be trying to tell you something important? Quiet possibly.

Scratching their glass is abnormal behavior and should be approached with care.

Paying attention to and researching bearded dragon behavior is a crucial part of being a responsible exotic pet owner, so kudos to you!

Seeing your beardie frantically pawing at or scratching the glass, in most instances, is usually a sign of stress, but could also mean they’re bored too.

There are, however, several other factors attributing to this kind behavior so let’s first dive deeper…

What is Glass Surfing Anyways?

Glass surfing could be summed up as the frantic behavior of a bearded dragon attempting to climb the glass of their tank. T

his behavior (a.k.a glass dancing) is usually repetitive in the sense that a beardie will continue to attempt to climb the glass over and over.

The term glass surfing is derived from a similar behavior to that of a surfer in the ocean.

Only in this instance, your beardie’s belly will be rubbing on the tank wall as they simultaneously “paddle” their tiny arms on the glass.

Further, this behavior is usually accompanied by your dragon standing on their back legs as they try their best to climb the tank walls despite continuing to slip and fail.

Alternatively, a bearded dragon who is glass surfing could also be accompanying this behavior with running up and down their enclosure which should further indicate that something is wrong.

8 Reasons Why Your Beardie is Scratching their Tank

So, what gives? Should you move closer to the ocean so your beardie can live out their fantasy of being a pro surfer? Well, not exactly.

As mentioned above, there are several reasons why your bearded dragon is glass surfing and could generally be attributed to something stressing them out. Consider the following 5 reasons in greater detail.

Reason #1: They See Their Own Reflection

Bearded dragons don’t realize that their reflection is simply their own and instead mistake it for a nearby bearded dragon that they could potentially interact with or feel threatened by. You can help your dragon minimize this scratching behavior by using a good background that wraps around the back and sides of their tank.

Reason #2: They Don’t Comprehend the Idea of Glass

On the heels of mistaking their own reflection, Bearded dragons fail to realize that glass is a barrier and will continue to scratch it in an attempt to go through it, which could be for several reasons.

If there are insufficient locations for them to hide out in their tank (think reptile caves and tunnels), then this could be provoking them to glass surf since bearded dragons like to seek shelter and hide from being in plain sight.

Alternatively, they could also be in search of food. Reason #3: Something is Off in Their Habitat

There are several instances where their environment or habitat could be stressing them out and therefore the culprit behind this behavior.

Examples of this include whether their tank is large enough, if they have adequate lighting, or in some cases, could be that certain décor is stressing them out, like that new Batman bobblehead for instance.

Additionally, where their tank enclosure is placed inside your home, thus affecting what your beardie can see, could also be contributing to their stress. Consider the following questions… Whatever the case may be, if their tank is placed near a window where they can see the outside or near something that they feel threatened by, then both instances could cause them to feel vulnerable and be the reason for the scratching on their glass tank.

If you don’t believe this to be the case, then check the temperatures of their tank to make sure they are not too hot.

Higher than ideal temperatures could consequently be causing increased activity levels of your bearded dragon.

If you suspect this to be the case, check your temperatures and decrease them as needed. This leads me to the next idea…

Bearded dragons must be able to go from a hot basking area to a cooler area in order to properly thermoregulate.

If the temperature throughout the tank is the same, your beardie will not be able to accomplish this which consequently could result in them scratching the glass. Make sure that the basking area is very warm (110 – 115 degrees F) and other parts of their habitat are less than 85 degress F.

If your bearded dragon is frantically scratching the glass (or digging, too), then this could be an indication that they are attempting to seek solace from the heat.

In contrast, if the basking area is not warm enough, your beardie may be scratching the glass attempting to climb higher so they can be nearby the heat source.

Reason #5: They’re Bored and Want to Spend Time With You Outside Their Cage

Being cooped up in a cage for hours on end can take its toll on any creature. Scratching their glass could simply just be an indication that they want out of their tank, want to spend time with you, or their lacking enrichment and just bored.

Use this opportunity to take them out of their tank to get some exercise and do something fun!

Although not the most likely, similar to cats and dogs, scratching the glass could be a sign that they are simply hungry and are trying to signal to you to feed them. Reason #7: They’ve Pooed…and Need You to Clean it Up ASAP

According to several threads in different forums, members have reported that their bearded dragon will glass surf right after they’ve just finished doing their business to signal to their owner to clean it up. So now back to you, did your dragon just finish a #2?

Typically, this will happen at or around 2 years, but could happen as soon as 18 months. If this is the case, then they could potentially lay eggs once a year. If you suspect your pet may be about to lay eggs, click HERE to read more about bearded dragon egg laying

Could My Bearded Dragon be Sick if They’re Scratching the Glass?

Not necessarily. There aren’t any medical reasons correlated with glass surfing aside from simply being stressed.

However, if your bearded dragon is exhibiting other symptoms as well such as acting lethargic and not eating to name a few, then this could be a clear indication that something is indeed wrong and that they could be sick.

In such instances, schedule a vet visit ASAP. How to Stop Your Bearded Dragon from Scratching the Glass

Since this behavior generally indicates some cause of stress, you may want to first consider addressing any of the aforementioned reasons.

Consider what the most logical cause for this behavior is and make small and appropriate changes first. Additional changes and adjustments you could make are…

Get a Bigger Tank

As a bearded dragon grows into an adult, the space that they needed as a juvenile will no longer suffice.

Providing enough space is important for your bearded dragons overall health and happiness.

Have the Appropriate Lighting

Having the proper lighting setup, cycles and temperatures are crucial to keeping them both happy and healthy. Make sure you’re using good and accurate recording device to measure humidity and temperature. As previously discussed, one reason for glass surfing could simply be out of bored.

In this instance, consider taking them out of their cage to spend some quality time with them by doing something fun.

Giving them more attention and letting them try new toys or activities such as going for a walk will make a world of difference.

At the very least, take them out of their tank and spend time handling them. Seeing your bearded dragon scratch the glass doesn’t necessarily mean your beardie is stressed out indefinitely.

It is, however, a big indication, but could also be done out of boredom as well.


If you're looking for a reliable bearded dragon food and supplies online store, we recommend Chewy! It is the most trusted and convenient online destination for reptile pet owners. Click here to save 30% on your first order. I may receive a small commission if you purchase after clicking. This does NOT change what you pay or what I recommend. It does help fund the research we put into the site, and I’m grateful for any support!

There are other signs that your beardie may display in conjunction that should further indicate they are stressed out such as having stress marks and darker coloration, decreased activity levels, and loss of appetite.

Being able to decipher your bearded dragon’s behavior is important since it will allow you to more quickly pinpoint signs of trouble early on behind things get worse.

If you’re unable to remedy the behavior yourself, consider scheduling a vet visit so they can be further examined.

10 thoughts on “8 Surprising Reasons Bearded Dragons Glass Surf (Plus How to Stop It!)”