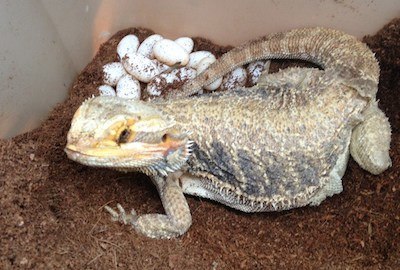 Unlike most animals, bearded dragons will lay their eggs in what is referred to as a “clutch”, which is basically a cycle.

And whether your bearded dragon is actually pregnant for the first time or simply laying infertile eggs, chances are you’re probably asking yourself “How many eggs do bearded dragons lay?”.

To be concise, you can expect your dragon to lay on average anywhere from 20 to 30 eggs per clutch, with anywhere from 3 to 6 clutches on the high end.

If your dragon was mated with a male, this naturally means you can be in store for quite the arsenal of babies, so it’s important to be prepared with plenty of supplies.

If your bearded dragon is going lay a clutch of fertile eggs, then I highly recommend making the jump to the article below to read about how to help her have as easy, healthy, and stress-free of a laying process as possible.

Related: How to help your bearded dragon lay eggs

If you’re interested in learning more about what to expect from your gravid (aka pregnant) female as she lays her eggs, just keep reading below. Also, feel free to use the table of contents below for fast and easy navigation.

Some owners have reported instances of their bearded dragons being gravid with infertile eggs as early as 10 months old, although this young seems to be on the rare side.

Also, it is important to note that not all female dragons will lay infertile eggs in their lifetime, although many will. 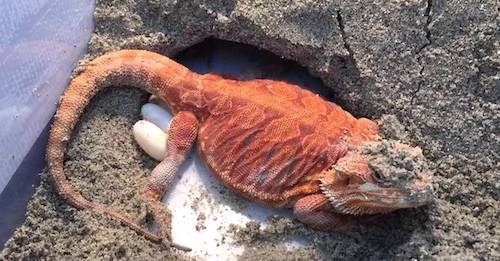 In terms of when you can breed a bearded dragon, it is generally advised that you wait until the female is at least 2 years old, with the male being at least 1 year but ideally 1.5 years.

Bearded dragons that are bred to young can have major health consequences later on in life, especially the females.

A female that lays eggs before she is fully done growing is at risk of losing a lot of calcium in her body and thus, having her growth stunted and even her lifespan shortened.

Can My Bearded Dragon Lay Eggs Without Mating?

Absolutely. As aforementioned, bearded dragon females can become gravid and lay several clutches of infertile eggs on and off throughout their life.

However, not all female beardies will go through this, but if yours does, fear not as it’s totally normal.

How often a bearded dragon lays infertile eggs (seen in the image below) is going to vary completely from dragon to dragon.

Typically, a dragon can lay several clutches during “mating season” of infertile eggs, with 20 being the average number you can expect per clutch, give or take. 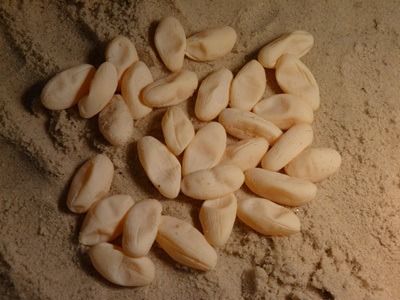 With some dragons, they’ll lay a clutch over the course of a few days (or a single day), take a few weeks off, and then repeat the process.

This can happen over the course of a few months.

So, How Many Eggs Do Bearded Dragons Lay?

In a single clutch, you can expect your bearded dragon to lay around 20 eggs, give or take some.

On the extremely high end, she may lay into the mid-thirties, although this isn’t too common.

So, just be prepared for roughly 20 eggs across 2-4 clutches on average. But again, this will vary on a dragon by dragon basis.

After she’s completed laying her clutches for the first time, you’ll have a better idea moving forward of what to expect with her.

How Long Does It Take for a Bearded Dragon to Lay Her Eggs?

Assuming you’re talking about a female bearded dragon who is gravid with non-fertile eggs, it can take several days for her to finish laying each clutch, and weeks if not months for her to stop her laying altogether.