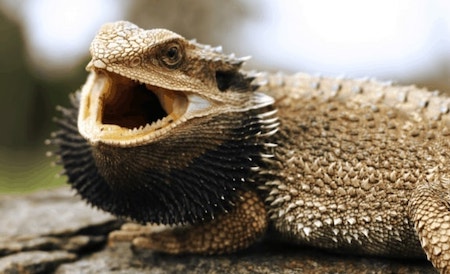 An alarming sight for many first time owners, a bearded dragon black beard can often incite worry and concern!

I mean let’s face it… the scales on your beardie’s neck and chin turning pitch black doesn’t exactly seem like a happy or friendly bodily reaction, right?

Naturally, you’ll want to know why exactly your buddy goes from perfectly normal to a black bearded dragon in a matter of seconds.

If you’ve poked around this site already or have done much reading on bearded dragons, then you’re probably already guessing that the reason for your bearded dragon’s black beard could be due to a wide number of reasons.

Elusive by nature, beardies sure love to keep their owners guessing when it comes to not only how they’re doing but why they’re acting a certain way.

Luckily, a bearded dragon beard turning black is pretty hard to miss. This means that you’ll have an advantage when it comes to quickly figure out if something could in fact be wrong with your beardie.

After all, when it comes to our pet’s health, time is most certainly of the essence.

Why Do Bearded Dragons Turn Black? 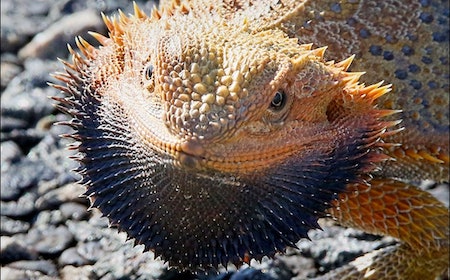 Much like other bearded dragon behavior, there isn’t one sole reason behind why beardies show a black beard. From internal reasons to their environment, it’s up to you to pay attention and put on your thinking cap to determine what is affecting them.

To learn more about the specific reasons, read on to discover the top 9 reasons why bearded dragons demonstrate a black beard below!

Much like a cat that might hiss or yowl, a bearded dragon will attempt to deter what they consider to be a threat by black bearding.

A black beard is both a sign of distress and a warning to those around them that they find threatening.

In the wild, it is not uncommon to see male bearded dragons demonstrate a black beard when they encounter one another. Think of it as their way of trying to intimidate one another.

This leads us directly into Reason #2…

Male bearded dragons that are looking to mate will often display black beard pretty regularly, especially when in the presence of a female.

Don’t be surprised if you see your male bearded dragon showing black beard in the springtime. I’ve even heard of female owners saying they think their male beardies are flirting with them by doing this!

If you suspect your male bearded dragon is showing black beard because it’s that time of year again, pay special attention to see if you notice any head bobbing as well.

Head bobbing and black bearding almost always go together when male beardies are looking to sow their oats.

Like a small child’s face that may puff up and become red with anger, a bearded dragon’s beard will often times turn black in situations where they find themselves mad or annoyed.

Think of it as their way of saying “I am NOT happy right now, so don’t mess with me!”.

I’ve often seen bearded dragons demonstrated behavior like this when in the bath or around other pets. It’s a clear indication that whatever is going on around them is upsetting them enough for you to step in and remedy the situation.

After all, there’s no need to put your dragon in situations that cause them distress, this just strains their immune system and stresses them out. Try to keep them happy and content by instead acting in their best interest.

If they don’t like baths? Well, try misting them instead or giving them water droplets on their snout to lick off. Only bath them to help with sheds.

If the family dog bothers them (which it should!), try to keep the dog out of the room their tank is in, and for God’s sake do NOT ever put them face to face or near one another. This especially goes for the family cat as well. 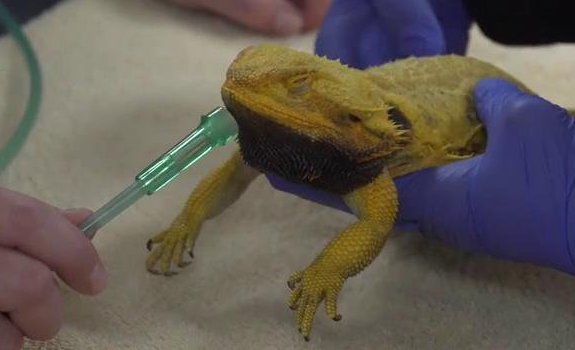 Often times one of the first indications that your bearded dragon is not doing so well is a black beard.

In the wild, bearded dragons do everything they can to disguise being sick or hurt as this surely makes then an easy target for predators.

And unfortunately for us loving pet parents, this behavior is so ingrained that they demonstrate it in captivity as well!

This means that we need to pay especially close attention to our beardies considering they’ll do everything they can to keep us out of the loop with their health.

Now, of course there are other signs your bearded dragon could be sick as well, so I highly recommend you acquaint yourself with more than just black bearding.

Knowing the obvious signs of a sick bearded dragon is key to tackling serious diseases like Metabolic Bone Disease and Yellow Fungus head on before they spiral out of control.

If you have two bearded dragons together in the same tank… first of all WHY? And second of all, be ready for some pretty bad (potentially lethal) fights over territory, including black bearding!

Never should you ever house bearded dragons together. As solitary creatures, they are not meant to share space with one another.

From bloody limbs to even fatalities, this living situation is nothing short of reptile abuse and should be avoided at all costs.

A male and female will result in constant sexual harassment of the female, and can include fights as well.

The male will in part try to mate with the female all the time and should she put up a fight and say no? Well, expect a fight in which the bigger lizard, typically the male, will always win.

Your poor female will always lose in this scenario. Even if she’s much bigger and able to hold the male off in mating and fighting, the constant stress alone is enough to do her in.

Should you want to mate bearded dragons, you must study up on proper bearded dragon breeding protocol to ensure the father, mother, and babies are all healthy and happy.

Even two females together will also likely result in fights or bullying.

Although this match is the least likely to turn violent or deadly, it is still not an ideal housing arrangement. Even bearded dragons that are sisters from the same clutch are likely to fight over space, food, heat, and more.

Typically in these instances, the smaller sister will have a hard time getting enough food or getting to bask without the larger sister basically attacking her.

The only instance in which bearded dragons should live together is when they are first born, under the watchful eye of an educated breeder.

Since 20 or more beardies can be born per clutch, naturally it would be difficult to separate all of them, so I understand housing them together for the first two months or so before they find homes.

Reason #6: They Don’t Trust You 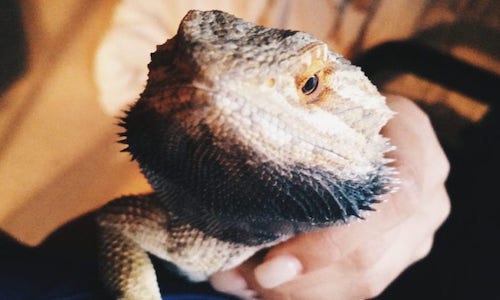 If you have recently adopted a bearded dragon, don’t be terribly surprised if you notice them giving you a black beard for the first couple days or even weeks. What is really going on is them adjusting to you.

In the eyes of your bearded dragon, their entire world is totally different out of nowhere! Not only does a huge creature preside over them, but even the enclosure they find themselves in in foreign!

Pretty hard to blame the black bearding when you consider what it must feel like for them in this situation, right? Don’t take things personally if you’re going through this at the moment.

What you can do to help speed along the process of them learning to enjoy your company is to practice specific bonding exercises that will help them learn to actually like and trust you.

Have you ever taken your bearded dragon out for cuddles or play time, only to put them back in their tank and witness immediate black bearding?

Or what about this, you’re watching your bearded dragon in their tank and they’re acting perfectly normal… then the next thing you know they’re at the glass staring at you with a black beard?

If either of these instances sound familiar, then rest assured that your little guy or gal is just looking for some good ole fashioned attention!

You see, much like our furry friends, bearded dragons can also need special time bonding with you and quite enjoy time out of their tank.

I mean, how would you like being cooped up all day in the same room when you could instead be outside exploring and getting special attention or treats from a giant who loves you?

If you suspect your bearded dragon is black bearding out of the blue and everything else seems totally fine, ask yourself, “When was the last time they came out of the tank?” or “Is it possible that they want to snuggle with me or enjoy a treat?”.

It isn’t uncommon for bearded dragons who have recently come out of brumation to be a little on the cranky side.

From readjusting to long hours of daylight and getting their appetite back, the big sleep can certainly take a toll on a beardie’s attitude!

As such, don’t be particularly alarmed if your bearded dragon shows a black beard after brumation for a couple of days or a week, especially if brumation went smoothly;. Just be patient and give them a little bit of time to readjust. They’ll come around in no time!

But, what if you’re new to this whole brumation thing? No worries! Here’s everything you NEED to know… 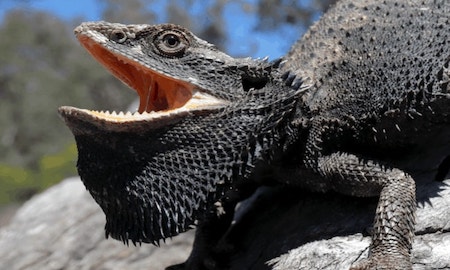 When your bearded dragon is cold, they can actually turn their whole body a darker shade in an attempt to soak up and attract more heat.

Now, the best way to determine if they’re cold is to of course measure the different temperature zones in their enclosure.

Because those cheap stick-on dials are notorious for giving inaccurate temperature readings (by as much as 20 degrees!) you’ll want to make sure you’re using the RIGHT thermometer to get an accurate reading.

After all, your beardie’s health and happiness depends on it.

So, there you have it! I hope you found this article helpful in understanding some of the many reasons why your bearded dragon may be showing a black beard.

From underlying health concerns to simply wanting a bit of a snuggle, the reasons will vary far and wide.


Now, with that being said I don’t want to freak you out and think that a black beard always indicates something super serious. That just simply is not the case. I look at it as a black-bearded should simply never be ignored.

The best bit of advice I could give you is to always go with your gut.

You know your bearded dragon better than anyone else and if everything seems totally fine, chances are they’re not black-bearding for any major or concerning reason.