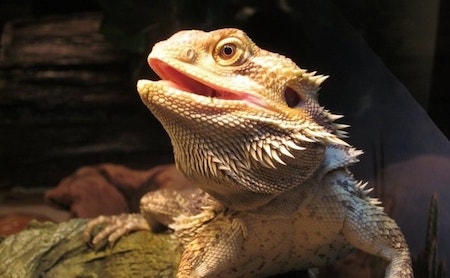 When compared to that of the family cat or dog, bearded dragon behavior unfortunately isn’t always so easy to pick up on or understand.

You see, when it comes to deciphering the meaning behind your cat or dog’s behavior, the explanations are obvious and feel almost culturally ingrained within our brains.

We know, before even realizing it, that a wagging tail or a soft guttural purring are both signs of contentment in our furry friends. But what about our pets that are noticeably less furry, who err more on the cold blooded side?

Everyone knows that a dog wagging its tail is happy, just as a cat hissing or yowling is angry or scared.

But, what about your bearded dragon?

How do we know when they’re sad, angry, hungry, playful, or anything else for that matter?

How exactly are you supposed to decipher the meaning behind bearded dragon behavior, especially if you’ve never had a reptile for a pet before?!

Fortunately, this is where I come in.

As a reptile expert myself, I’ve created this article to serve as your all-in-one resource for decoding your bearded dragon’s behavior and body language alike so you can ultimately take better care of them.

If your bearded dragon is doing something strange, chances are I have an explanation for it below.

Common Bearded Dragon Behaviors to Be Aware of

All bearded dragons will likely exhibit some if not all of the behaviors listed below. As a responsible pet owner, it’s up to you to become familiar with what not only each of these behaviors mean, but what triggers them as well.

Understanding your beardie’s body language and behavior will give you a serious look at their health, mental state, and much more.

Do you ever feel like your bearded dragon is trying to catch your attention by waving at you from behind the glass? If so, it could be their way of showing submission to you. Sure, it sounds crazy but it’s true!

You see, like a dog that might lay down and show you it’s belly, a bearded dragon that feels submissive or intimidated will wave it’s arm!

Many specialists also believe that arm waving is something beardies do in the wild to signal to other beardies that they mean them no harm and are not a threat.

Also, arm waving has been considered a part of the mating ritual as well, with females often arm waving back at males who head bob at them.

Because of this, I took it upon myself to write an entire article dedicated to the potential meanings behind head bobbing. Here, you’ll be able to learn specifically WHY bearded dragons head bob.

If you have noticed your bearded dragon head bobbing lately, I highly recommend you check it out!

Much like your dog scratching desperately at the glass after being put outside, your bearded dragon too may scratch at the glass, displaying what is commonly referred to as “glass surfing”.

However, unlike your dog who just wants back inside, this behavior from your bearded dragon could mean a multitude of different things.

In fact, I’ve dedicated an entire post to deciphering this strange behavior because in actuality, there can be SO many reasons behind it!

Make the jump to discover the 8 surprising reasons why bearded dragons glass surf and how to get them to stop.

Like other species of reptiles, fish, and amphibians, bearded dragons have what are called “Chromatophores”.

Chromatophores are pigmented cells that reflect light and allow them to change color as they react to their environment.

Now, before diving much deeper into color changes it is important to first note that bearded dragons can change color as they age.

So, if your beardie seems to darken or brighten up as they get older, don’t worry too much, especially if this change takes place over the course of months.

Additionally, some bearded dragons can change color as they warm up or become happy.

If you notice your bearded dragon turning a brighter color, like orange, light brown, or yellow, when they’re warm or appear to be in a good mood, don’t worry about it too much!

Now, if you notice your bearded dragon’s color change out of nowhere or come on in a very dramatic fashion, this is when you’ll want to pay attention…

A bearded dragon that darkens its body or beard is typically one that is either cold, angry, scared, stressed, ill, or threatened.

You’ll want to figure out why your bearded dragon’s body or beard is dark as none of the aforementioned states are desirable.

2 Reasons Your Bearded Dragon is Darkening Their Body

Believe it or not, often times when your bearded dragon is cold, they’ll actually darken up in an attempt to attract warmth!

Whether in the sun or under their basking bulb, a dark bearded dragon is simply trying to just warm themselves up.

Additionally, you may notice your bearded dragon during this time flatten out, kind of similar to a pancake.

This is also a mechanism they’ll use to warm up as it enlarges their body, allowing them to attract more heat.

Imagine how on edge you’d be feeling stressed out all day long, due to things out of your control.

Sure, your skin color might not change but chances are your stress would physically manifest in other ways, like breakouts or lashing out.

Unfortunately, there are a lot of things that could be stressing your bearded dragon out, so it’s up to you to really put your thinking cap on here. Ask yourself the following questions…

Has anything changed recently in their tank that could be making them feel uneasy?

Are there any feeders jumping around after meal time that could be biting them?

Has anything changed outside their tank, such as the introduction of a new pet in the family or perhaps kids home for the summer causing extra noise and commotion?

Fortunately, there are measures you can take to help destress your bearded dragon FAST and get them back to their normal color.

If your bearded dragon is preparing to have a shed, don’t be alarmed if they seem to be a little bit on the cranky or reclusive side.

You may additionally notice them not wanting to be held or even seeming a little restless and fidgety.

They may even black beard a little more than normal as well.

Also, it isn’t uncommon for their appetite to be a little non existent as well. So, if they’re not eating much don’t be too concerned unless this behavior goes on for more than several days.

To make this process easier and more comfortable for your bearded dragon, make sure you educate yourself on how to safely help a bearded dragon shed.

Before discussing the behaviors associated with a female bearded dragon who is about to lay eggs, let’s make sure you’re caught up on beardie reproduction.

Namely, if you didn’t know… female bearded dragons can lay eggs with or without any formal mating.

This means, that even if your female bearded dragon hasn’t been around any males, she could still be “gravid” AKA pregnant and lay a clutch of infertile eggs.

In the weeks leading up to your female laying her eggs, regardless of whether they’re fertile or infertile, she will likely display some specific behaviors.

For starters, she may seem lethargic and less active, choosing to lay under her heat lamp. Then, as she gets ready to lay their eggs, she will begin digging within her enclosure.

If you suspect that your bearded dragon is gravid and going to lay eggs, you’ll want to make sure you provide her with a lay box and also adjust her diet to keep her healthy and make her birthing process as easy on her as possible. 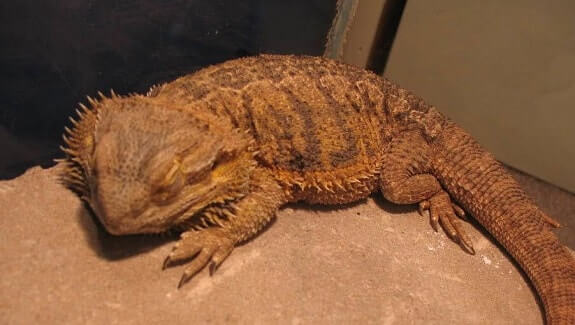 If your bearded dragon is coming out of brumation than you need to be prepared for them to be a little on the lethargic side.

Also, don’t expect them to have much of an appetite either.

How long it will take your bearded dragon to go back to normal will vary on a case by case basis, with some beardies acting like their normal selves within a few days and others taking a whole month. Just be make sure to be patient.

On the flip side, you may also notice your bearded dragon has a bizarre sleeping schedule and random bouts of energy.

During this time, they’re adjusting to being awake again so don’t be too surprised if you find them acting sleepy and taking long naps, only to wake up later with tons of energy!

Bearded dragons who seem especially anxious to get out of their tank are also no cause for concern.

Brumation can be a pretty confusing if not scary experience for many first time reptile owners, so make sure you familiarize yourself on what to expect and how to help your beardie during their brumation.

All in all, bearded dragons can display some pretty weird behavior.

However, more times than not, this behavior is not a reason for concern so much as it is an opportunity for you to learn more about your pet.

Nine times out of ten, your bearded dragon’s behavior is a direct response to something in their environment that is either stressing them out or not ideal. An unusual change of temperament can however also be a sign of parasitic infectious diseases.

This is why it is so important to understand what the behavior means so you can be in tune with what they need from you.