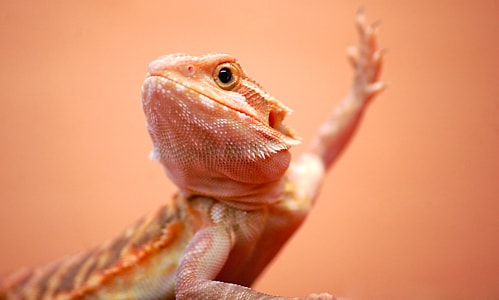 Chances are, if you’re reading this article, it’s because you’ve recently witnessed your bearded dragon arm waving, a behavior (opens in new tab) that is both totally amusing AND absolutely perplexing at the same time.

Raising their little reptilian arm slowly in the air and moving it back and forth as if waving! It’s definitely NOT something you’d ever expect a reptile to do!

But, why exactly do they do it?

Should it be a cause for concern if you see your bearded dragon arm waving at you?

Is it our duty as loving pet owners to try to fix or stop this behavior?

In this article, we will explore all 3 of the questions above as we examine this unique behavior that has left so many owners baffled and others believing misinformation. 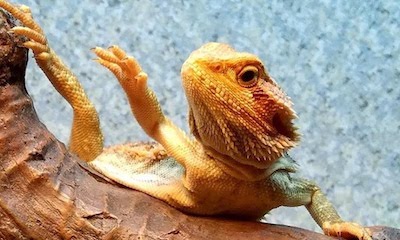 In case you’re on the fence about whether or not your bearded dragon is actually warm waving, just know this…

If your bearded dragon is doing anything with its arm, chances are it’s arm waving!

Although you might think based on the name that arm waving will be pretty obvious when you see it, I’ve seen bearded dragons demonstrate arm waving in a variety of different ways!

Some stand up on hind quarters to arm wave, while others move their arm just barely off the ground, almost as if pantomiming taking a step.

Others might even arm wave against the glass of their tank, making it seem almost as if they’re scratching and not arm waving. I’ve even seen beardies arm wave with BOTH arms before! It’s pretty crazy to see.

The bottom line is this, if your bearded dragon is picking up one or both of her front legs and moving them back and forth, no matter how slow or fast, they are most definitely arm waving.

Why Do Bearded Dragons Arm Wave?

Perhaps not to your surprise, the internet is chock full of misinformation and misguided explanations for why bearded dragons arm wave. This is likely in part due to the fact that until very recently, bearded dragons were not even that popular as pets!

You see, bearded dragons have only really surged in popularity within the last 5-7 years or so. Before that, various breeds of gecko, turtle, and snake ruled supreme as the go-to reptile choices.

Nowadays, bearded dragons are just starting to surge in popularity, which is causing more and more people to question their behavior and ask new questions.

In an attempt to keep up, the internet and pet stores alike are rife with information and answers, some wrong some right. This is one reason why it is SO important to really dive deep and do your own thorough research.

But, I digress. Anyways, here are the primary reasons your bearded dragon is arm waving…

Reason #1: They’re Acknowledging Your (Or Someone Else’s) Presence 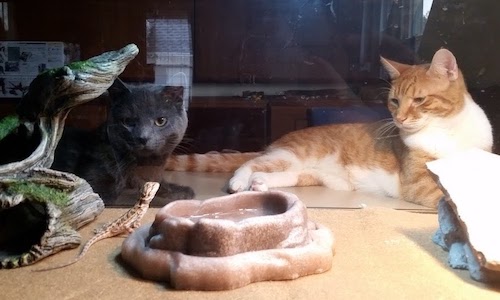 Another reason bearded dragons arm wave is to simply acknowledge the presence of another bearded dragon, animal, or human. Now, while this may sound like a greeting it should be noted that it’s less of a friendly “hello” and more of an “I see you there, I’m aware of you so don’t try and sneak up on me”.

In the wild, it is useful for smaller animals and reptiles to show creatures around them that they are aware of their presence. This can help offset the chances of an attack in which the predator or larger creature sneaks up on the bearded dragon.

It’s basically a bearded dragon’s way of letting you know that they’re aware or your presence so act accordingly. So, no sneak attacks.

Like a dog that shows its belly or a cat that crouches down low with her tail tucked in, bearded dragons can also demonstrate submissive behavior. This is something you’ll often see when you have more than one bearded dragon living in the same tank (Not recommended btw).

It’s not uncommon to see juveniles arm waving at one another, especially smaller ones at their larger siblings. Baby and juvenile bearded dragons are notoriously for bullying and aggressive behavior, so you’ll want to make sure if you are responsibly breeding bearded dragons, that you’re watching the hatchlings closely.

You might also witness submissive behavior towards or another pet as well. If your bearded dragon is feeling nervous, they may become submissive and want to show that they are not violent or a threat. Hence, you’ll likely see some arm waving.

It is often observed that before male and female bearded dragons mate, that the female will arm wave at the male. Whether this is a sign of recognition, submission, or something entirely different is pretty much up for speculation.

Nonetheless, arm waving is a behavior that often accompanies breeding in the wild and captivity.

Can I Stop My Bearded Dragon From Arm Waving? 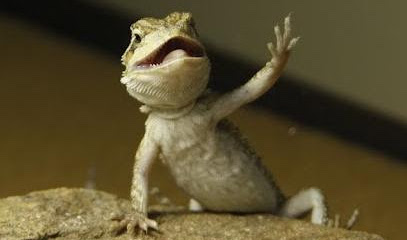 In short? No. Arm waving is an ingrained and natural behavior, so stopping a bearded dragon from doing this would be virtually impossible. It would be like stopping a dog from wagging its tail!

However, you can perhaps make changes depending on why exactly your bearded dragon is arm waving. If you’re able to make environmental changes then perhaps you will see arm waving less frequently.

For instance, if you remove other bearded dragons from their tank because they’re being bullied and then place them in their own tanks set up for them to thrive, you should anticipate a decrease in arm waving. this behavior.

All in all, bearded dragon arm waving is a pretty normal behavior that shouldn’t really give you too much concern. More times than not, your bearded dragon is simply just showing you that they mean you no harm and are aware of your presence.