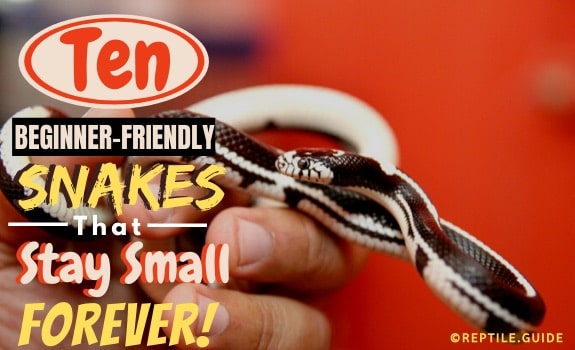 When a typical person envisions a pet snake, they probably imagine a ginormous Burmese python or reticulated python. Perhaps even a girthy ball python (opens in a new tab) or even a long corn snake.

This can be a nightmare for people who are merely afraid of snakes. However, the truth of the matter is that not all snakes that are kept as pets are larger than life…

Snakes that stay small are an EXCELLENT starting point if you have a little bit of fear holding you back. They’re also a perfect middle ground if you live with a relative or roommate who has ophidiophobia.

After all, it’s hard to be afraid of a cute little guy that fits in your palm! Of course, there are even more benefits than the “cute and non-threatening” factor of small pet snakes…

Here are some other reasons why a small snake might be perfect for you:

However, as with all things in life, there are positive AND negative aspects…

As such, make sure you considered these “cons” before deciding on a small snake:

Now that we’ve covered the universal pros and cons of owning a small snake let’s dig deeper into individual species!

Also, please note that all of the information listed pertains to the animal’s care after it reaches its adult size. These beautiful little boas have a special place in my heart, and I currently own two of them myself.

Their Latin name, “trivirgata,” translates to “three stripes” for the three orange, brown, or black stripes running down their body. However, their color varies widely depending on the individual’s locality.

These desert snakes are native to southwestern U.S. and northwestern Mexico.

One of the MOST common husbandry mistakes is allowing the humidity in their enclosure to get too high, which can cause respiratory and fungal diseases.

As such, the preferred substrate is aspen shavings, which can help to keep the humidity low.

They also enjoy climbing and burrowing.

Rosy boas are a readily available species in captivity, with many naturally-occurring, locality-specific colors. There are also some morphs available. Several viral videos have showcased their amusing defensive behaviors, including hooding up like a cobra and playing dead. However, it should be noted that they rarely bite.

This small species is native to the United States and their name comes from the upturned scale on their rostrum (nose), which gives them the adorable “boop-able” and pig-like appearance.

This species enjoys spending its time on and under ground-level, so enclosure height is not essential. Aspen is an EXCELLENT substrate choice that will allow your hognose to burrow to their heart’s content.

This species naturally eats toads and other amphibians outside of captivity. They even have a unique tooth utilized for “popping” toads, which inflate as a defense mechanism.

Because of their natural diet, it can be challenging to get neonates (babies) interested in mice. However, once they have gotten started on pinkies, they’ll eat rodents enthusiastically.

Western Hognose snakes are becoming increasingly popular as pets, and they are readily available in captivity, and there is a variety of morphs available. Kenyan sand boas are native to Northern Africa. As their name implies, they spend most of their time burrowed in the sand.

Because of this, decorations can be kept to a minimum. In fact, bulky decorations could even crush the snake if they burrow underneath them.

Any substrate that they can burrow in would work – calcium or play sand, aspen, and coconut mulch are some popular choices, depending on your preferences regarding cleaning and appearance.

Kenyan sand boas will readily eat mice and possess a docile temperament. Even individuals that aren’t used to handling will usually try to squirm away, rather than bite.

Thanks to their ease of care and attractive pattern, they’re readily available in captivity. There are also several color morphs to choose from. Milk snakes are a small species of kingsnake that are endemic to many parts of North, South, and Central America. There are twenty-four subspecies currently recognized.

Their adult size can range from less than two feet to six feet depending on the subspecies, so make sure to do your research if you are looking for a smaller individual. The New Mexico Milk Snake is one of the smallest species, topping out at around eighteen inches.

This species has been widespread in captivity since the 1970s due to their ease of care and stunning colors.

Their red, black, and white or yellow bands are meant to mimic the venomous coral snake to ward off would-be predators.

In addition to the twenty-four subspecies available, there are also dozens of genetic morphs to choose from. Thanks to the variety, there is bound to be a milk snake that is appealing to everyone!

Each subspecies requires slightly different care, so make sure to do some additional research if you decide on this species. The rubber boa is native to the Western United States. They live in the coldest environments for any boa species, and they can even digest meals in temperatures as low as the sixties.

Many neonate (newborn) rubber boas will not eat for the first twelve to eighteen months of their life, and most adults will only eat during a few months out of the year. It’s important not to stress about this since the species is built to survive prolonged periods of fasting.

Rubber boas prefer to eat multiple young baby mice sold as “pinkies” or “fuzzies.” Feed them as many baby mice as they will eat, since they do not eat often.

It can be helpful to hide the prey under some cover to encourage the rubber boa’s natural tracking and hunting instincts.

Perhaps due to their monotone color, they never became prevalent in the pet trade. In the wild, they are relatively common, so many folks have luck purchasing a wild-caught individual.

There are only a handful of captive rubber boa breeders, and their waitlists can be lengthy. The primitive sunbeam snake is native to Southeast Asia and some regions of Indonesia. They spend most of their time underground.

Because of this, they aren’t very tolerant of frequent handling and may be difficult to observe in their enclosure.

Still, this species rarely bites, and its iridescent black scales are a significant appeal for many hobbyists.

They can be difficult to transition to a diet of rodents; they prefer to eat amphibians and other small reptiles. Even if they do accept mice, it’s essential to stick with young feeders because of this snake’s narrow jaw composition.

Hunger strikes brought on by stress are also common.

A humidity of 90-100% is ideal for this species, with 75% being the absolute minimum. Coconut fiber substrate holds moisture very well and allows the snakes to burrow to their heart’s content.

Despite these husbandry challenges, the rainbow-like sheen of their scales and fabulous temperament attract many snake keepers.

Captive breeding is difficult, so most specimens on the market have been field-collected. The viper boa, also known as the New Guinea ground boa, is a small boid species native to New Guinea.

Their common name comes from the viper-like appearance of their coloration and head shape, and perhaps even their somewhat defensive nature.

Their preferred habitats in the wild are very wet, so it is crucial to keep the humidity high in their enclosure. Even a water bowl large enough to swim or rest in might be an appreciated source of enrichment for your viper boa.

They don’t enjoy climbing, so floor space is the most critical aspect for this species.

Viper boas do enjoy digging, so be sure to provide at least two to three inches of any substrate that is easy to clean and retains moisture to maintain high humidity levels.

Being another amphibian- and reptile-eater by nature, it can be challenging to get these snakes interested in rodents.

As with any other species, it can be helpful to rub the scent of their preferred prey on the mouse that you intend to feed.

This species has recently declined in popularity as a pet due to increased importation restrictions. However, they seem to be making a comeback thanks to captive breeding programs.

But it should be noted that wild-caught individuals can be difficult to acclimate to captivity. Don’t let the image above fool you… Children’s pythons, while perhaps on the larger side when compared to the other snakes on our list, make a fantastic beginner species. They are native to the Northern half of Australia.

This species is perfect for someone enamored with pythons but not wanting to tackle the risk and responsibility of a goliath Burmese python or even a five-foot, stocky ball python.

They’re typically a terrestrial species, so enclosure floor space is the MOST important, but they will climb if given a chance. Provide them with several different decoration choices to hide in and explore, because they are very active and curious snakes.

They usually accept rodents with few problems, but you may need to scent pinkies with anoles for hatchling children’s pythons.

This species is a common pet due to its friendly nature, small size, and simple care, so they are readily available for purchase from captive breeders. This small, semi-arboreal species is native to Indonesia, New Guinea, and the Bismarck Archipelago. Despite their name, Indonesian tree boas are usually found on the ground or in low lying shrubs.

It can be challenging to find reliable information about the husbandry of this species. However, many aspects are thought to be similar to the keeping of their cousin, the viper boa.

Most individuals won’t accept rodents as a food source, so they will need to be fed appropriately sized frogs and lizards.

Their enclosure should include branches for climbing, ground-level hides or cover, and a large water bowl to soak in.

Despite the lack of knowledge and information about their captive husbandry, this species is thought to be hardier and easier to care for than the other larger tree boa species.

Most specimens in captivity are wild-caught. As their name suggests, African house snakes are found in Africa. They are popular amongst snake keepers due to their small size, voracious appetite, and hardiness.

They should always have access to a water bowl large enough to soak in to assist with shedding. It is essential not to cohabitate this species because they are known to cannibalize and, if you have a male and a female, they will breed like rabbits.

African house snakes are SUCH enthusiastic feeders that they tend to ingest a side of substrate along with their main course meal, which can cause infections and digestive issues, so they should be fed in a separate, empty enclosure.

They have been popular in captivity for some time now, and due to their proliferation, it can be easy to procure a captive-bred snake.

There are also several color morphs to choose from.

Which of These Snakes That Stay Small is Right for YOU?

I hope that these brief introductions to some of the smaller snakes species have helped guide you towards making the best choice for your situation.

Whether you are looking for something unique or common, fossorial or arboreal, plain-hued, or flashy, there is undoubtedly an ideal small snake species for everyone.

But word to the wise, ALWAYS establish your pet snake’s enclosure before bringing her or him home. Trust me when I say, the last thing you will want to be dealing with is a new pet that is failing to thrive due to an improper tank setup.