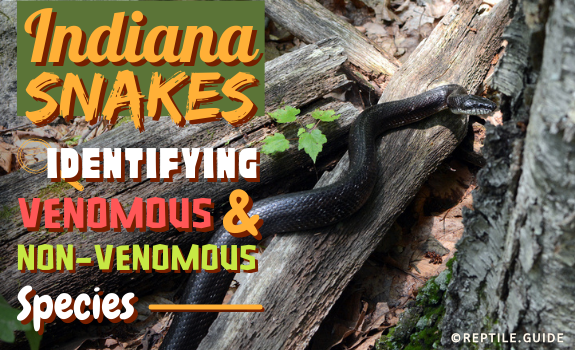 There’s more than just corn in Indiana – including roughly 36 species and subspecies of Indiana snakes!

Keep reading to learn which cold-blooded serpents call this midwestern state home, including four venomous species and many unique and harmless Indiana snakes, like the Eastern Blue Racer.

We’ll also cover some identification basics, including Indiana’s snakes’ pictures, and what to do if you encounter a snake in the wild.

Sometimes, the same snake species can look different depending on the state it lives in. This identification guide is for Indiana snakes only.

Here are some key features to look for when attempting to identify any wild snake:

With a bit of reptile education, differentiating pit vipers from most North American colubrids is straightforward. Look for these key characteristics:

The common snakes in Indiana that you’ll find depend on where you are in the state and the type of habitat you’re exploring.

The Eastern Garter Snake probably takes the spot for the most common species across the state.

Here’s a generalized list of the five most common types of snakes you might see across the entire state.

Fun Fact: Milk snakes also make great pets! Removing snakes from the wild is unethical and may be illegal where you live; be sure to buy your pet snake from a reputable breeder.

Most people automatically assume that any snake they see in the water is a venomous Water Moccasin.

In Indiana, the reality is that Water Moccasins only live in a tiny area in the southern region of the state.

Common Water Snakes, including the Northern Water Snake and Midland Water Snake, are common throughout the entire state.

These gentle, fish-loving snakes make great pets and have won the hearts of many reptile keepers.

So far, we’ve only scratched the surface with Indiana’s water snakes, venomous snakes, and common snakes.

There are plenty more Indiana snakes to learn about, from the loud and hissy Bullsnake to the dramatic wannabe-cobra Eastern Hognose Snake.

Southern Indiana accommodates a broad range of reptilian species thanks to its warm climate and diverse landscape.

Here are the typically-found snakes in Southern Indiana:

While Northern Indiana may not boast the level of species diversity that the lower half of the state does, the snakes that do survive in Northern Indiana are prime examples of resilience and adaptability in reptiles.

Many of these cold-tolerant species also inhabit Michigan.

What You Need to Know

No matter how scary you might think snakes are, in reality, snakes (even venomous ones) see larger beings – like us humans – as potential predators.

Most snakes would rather flee or hide than fight.

Predators, including birds of prey, foxes, and raccoons, rely on snakes as a source of food, which also controls pest populations.

Kingsnakes will eat other snakes, including venomous ones.

Rat Snakes in Indiana, as their name suggests, can clear rodents from a property.

The most important piece of snake safety advice I can offer is to leave snakes alone.

If you see a venomous serpent on a trail or your property, leave it alone, and it will eventually move on. Snakes don’t want anything to do with people.

Venomous pit viper bites in Indiana aren’t all that bad compared to other areas in the world.

Your chances of surviving a bite from any of Indiana’s species are pretty high, as long as you seek treatment at the nearest emergency room.

Further complicating matters, some harmless species, like the Eastern Garter Snake, are mildly venomous. Their specialized saliva only affects their intended prey; not humans or pets.

If You Encounter a Snake

Expert Tip: If you find a nest of snake eggs, the best thing to do is leave them alone. Disturbing them can kill the developing offspring, and might be illegal where you live.

When to Call for Help

Our turtle identification guide, which includes many turtles native to Indiana

If you’re interested in identifying wild reptiles, have a look at:

You can also check out our other reptile ID guides – carefully written by our experienced experts!

Have you ever seen a wild snake in Indiana? Were you able to use our guide to identify the species? Tell us about your exciting experience in the comment section, below.