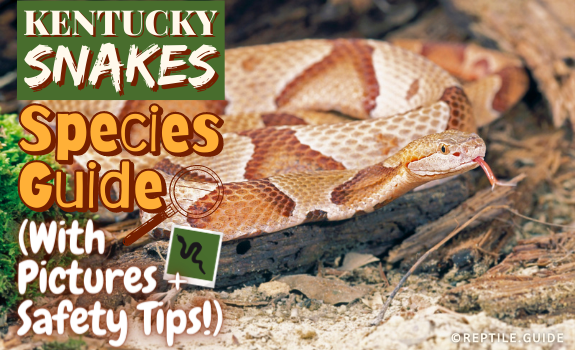 You’ll find a diverse assortment of snakes in Kentucky. From slender ribbon snakes to stout copperheads, this state boasts 32 different species of snakes.

I’ll cover how to identify the most common, most dangerous, and most iconic snakes in the Bluegrass State.

Read through to the end for a list of useful resources and recommendations on how to coexist with these captivating animals.

The biggest takeaways from this guide are:

The most important components to consider when identifying a snake are:

For example, if you find a brown snake in Kentucky, it could be many of the species within the state.

You’re much more likely to reach a correct identification when also considering the length, head, pupil shape, and where you found the snake.

There are only four venomous, often mislabeled as poisonous, snakes in Kentucky. All four species are pit vipers belonging to the Viperidae family.

Identifying these species is fairly straightforward due to their shared traits.

You can recognize pit vipers by their:

Although these features are excellent identifiers, many snakes have evolved to look or act like deadly vipers.

You’re also most likely to see these characteristics at close-range, which could present a dangerous situation.

Always proceed with caution if you aren’t 100% certain of a snake’s identity.

The copperhead is the most common venomous snake species in Kentucky.

They are a “Species of Greatest Conservation Need” in Kentucky.

The timber rattlesnake is the largest of Kentucky’s deadly snakes.

The pygmy, or pigmy, rattlesnake is the smallest pit viper in Kentucky.

Most Common Snakes in Kentucky

According to sites like iNaturalist, you’re most likely to find these types of snakes in Kentucky (in order from most common to least common):

There are three species of garter snakes in Kentucky. You’re most likely to encounter the common garter snake.

If you hear of a cow snake or chicken snake, it may be a gray rat snake in Kentucky. These nicknames come from its preference for consuming small rodents, birds, and bird eggs.

Some farmers utilize rat snakes as pest control around their barns.

The gray rat snake is one of several Pantherophis species that was once considered a subspecies of black rat snake.

After an update to their taxonomy, they’re now classified as individual species.

There are five species of water snakes in Kentucky. The common watersnake, or Northern water snake, is the most abundant in the state.

People often mistake watersnakes for cottonmouths because of their shared habitat preferences and similar appearances. However, there are several ways to tell them apart:

Cottonmouths only live in Western Kentucky.

Look for these snakes hiding with their preferred diet of earthworms and snails under rocks, logs, and debris.

These black snakes in Kentucky are difficult to keep up with. As their name suggests, racers are fast-moving.

Snakes are unique, variable animals. Some species are especially remarkable, standing out from the rest.

Let’s take a look at some of the most iconic species of Kentucky snakes.

The Eastern hognose, Heterodon platirhinos, is an unusual species with dramatic tendencies.

Hognose snakes have unique defensive displays. When threatened, a hognose widens its head and neck, inflates its body, and releases a long hiss.

If this isn’t enough to ward off a predator, the hognose will play dead. It rolls over, twitches, lets its tongue dangle from its open mouth, and emits a foul-smelling musk.

You’ll find these snakes in an assortment of habitats throughout Kentucky, but they prefer areas with sandy, loose soil.

Its upturned snout helps it burrow and dig for prey.

Although it isn’t one of the most common snakes in Kentucky, the scarlet kingsnake is memorable for its flashy pattern.

Many people easily and frequently misidentify these snakes as venomous coral snakes.

Their imitation of the coral snake’s pattern is called Batesian mimicry. The scarlet kingsnake tricks predators into thinking it’s venomous.

Don’t worry about remembering which is which, because coral snakes don’t live in Kentucky.

The scarlet kingsnake is deemed a Species of Greatest Conservation Need by the Kentucky Department of Fish and Wildlife Resources.

It only resides in extreme Southern, Eastern, and Western Kentucky.

Below is a comprehensive list of Kentucky snakes, organized by family and genera.

All but four of the 32 snake species native to Kentucky belong to the family Colubridae.

The Colubrids are a family of non-venomous snakes found throughout the world. It’s the most extensive family of snakes, and the most diverse.

All four venomous Kentucky snakes belong to the Viperidae family.

What You Need to Know

Snakes aren’t the scary beasts much of society has made them out to be. In fact, many snakes make excellent pets!

Most wild snakes are reclusive and prefer not to be around people. Coming across one in the wild is just as startling, if not more, for them as it is for you.

Other than accidentally stepping on or grabbing a snake, most bites occur when someone is purposefully trying to injure or handle a snake.

The best thing to do if you see a snake is to leave it alone.

Snakes are essential elements of the Kentucky ecosystem.

They help keep pest populations balanced by consuming rodents, insects, and other invertebrates that cause damage to crops and spread disease.

They’re also an important food source for numerous animals, including mammals, birds, fish, and other reptiles.

Snakes do more good than harm, and we need to keep them around. The most suitable way to overcome a fear of snakes is by educating yourself.

You’re more likely to accidentally step on a pit viper than you are many of the harmless species in Kentucky.

Instead of running away when startled, they prefer to stay as still as possible and camouflage with their environment.

Don’t let this worry you too much; venomous snake bites are far and few between in the United States, and fatal bites are extremely rare.

Except for the copperhead, most of Kentucky’s dangerous snakes live in remote areas away from civilization. It’s unlikely that you’ll come across one.

If you see one of the state’s venomous species, respect its space, and you’ll stay safe.

There are a few simple steps to keep yourself and your loved ones safe around snakes.

The best measures to take while in potential snake habitats:

Snakes commonly hide under rocks, wood, debris, and in vegetation.

If You Encounter a Snake

If you encounter a snake in the wild, stay calm.

Admire it from a distance and continue on your way, or let it leave on its own.

If the snake is in an area that poses a threat to you or it’s at risk, contact a professional wildlife handler to remove it.

Never attempt to capture or kill a snake.

When to Call for Help

Few situations warrant calling for help. The only times you’ll need professional assistance are if you or your loved ones are in danger.

If a venomous snake bites you, call 911 immediately.

Don’t wait for symptoms to appear. Antivenom is most effective when administered within a few hours.

Utilize the resources below to find professionals in your area.

Want to learn more about snakes? We have a myriad of detailed guides written by experts!

Is there something we missed that you’re dying to know about Kentucky snakes? Let us know in the comments!