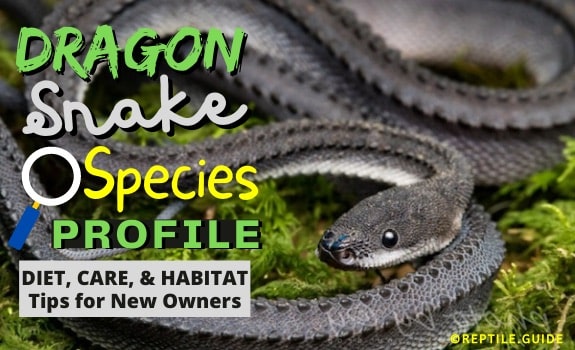 Dragon snakes have seen a recent surge in popularity thanks to their unique and exciting dragon-like appearance.

Viral social media posts have increased awareness and adoration of this elusive snake, but accurate information surrounding their care requirements can be hard to come by…

Thankfully, we’re here to remedy that issue and put you on the right path to becoming a conscientious and knowledgeable dragon snake caretaker!

Dragon snakes are native to the damp forests, swamps, marshes, and rice paddies of the Burma, Indonesia, and Thailand.

This species is considered fossorial, spending much of its time burrowed in mud or traversing murky water while hunting for frogs, fish, and tadpoles at night.

Their appearance is certainly unique from head to tail…

They have large, pronounced nostrils that probably evolved to help them breathe in wet and muddy environments. Their eyes are large, dark, and round – “beady” would be a fair description. There are three rows of raised dorsal scales running down the length of their body, which gives them their dragon-like appearance. There is no discernible pattern; they are uniformly dark gray, with off-white bellies.

Dragon snakes rarely bite, and their trademark self-defense behavior is as bizarre as their appearance.

When this species feels threatened, they will stiffen their entire body and remain motionless!

Due to their rarity and breeding difficulty, this snake is quite expensive. Husbandry setup aside, the cost of a Dragon Snake can be as high as $900+. 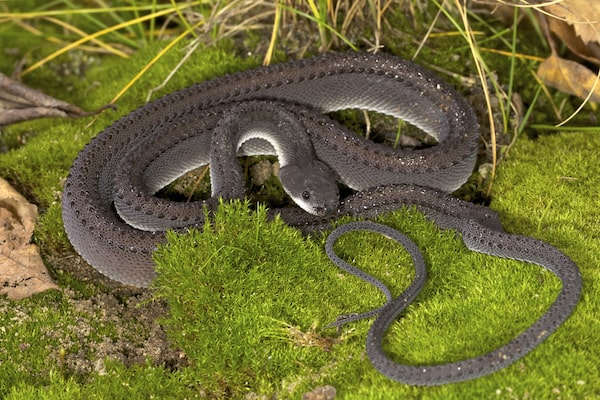 This species is an active hunter, so they will utilize and appreciate as much space as you can give them.

Still, this small snake rarely grows over 30” in length, so even small enclosures can offer them adequate exercise and enrichment opportunities.

They’ll also allow your pet to feel more secure when compared to glass aquariums and terrariums, which have total visibility (and, thus, vulnerability) from all angles.

🤓 Expert Tip: Moisture evaporates quickly from the screen lids of glass enclosures, so you may need to devise an alternate covering or insulation if you opt for this type of habitat.

When choosing your substrate, keep in mind that this semi-fossorial species relishes the opportunity to burrow. The ability to hold moisture while impeding bacteria and fungus growth are other vital aspects to consider.

Finally, it’s time to decorate. Be sure to offer your dragon snake at least two hides, with one on the warm side and one on the cool side of the enclosure.

A rock-like structure will allow your pet to climb off the damp substrate and dry off, as well as offer a rough surface for initiating the shedding process.

Last, but not least, a large, shallow water dish is a MUST since dragon snakes typically prefer to hunt in the water.

The water dish should resemble a rock in appearance and texture, because dragon snakes use the jagged edges to stabilize themselves while hunting.

Usage of smooth plastic or ceramic water bowls has been shown to cause stress and poor appetite in captive dragon snakes. 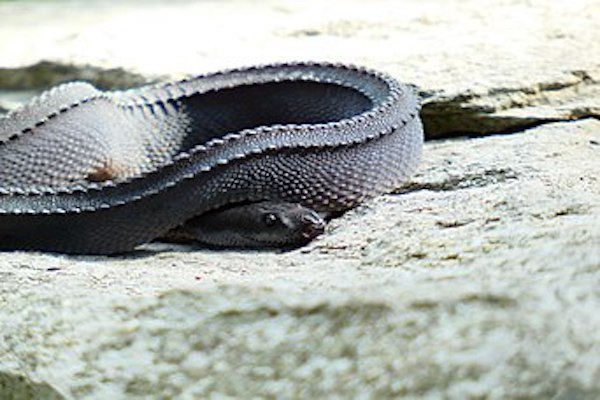 Dragon snakes require cooler temperatures than most other squamate species that are kept in captivity. Still, like any other cold-blooded species, they should have the opportunity to thermoregulate.

Facilitate this behavior by maintaining a temperature gradient in the enclosure.

Never allow their temperature to climb above 80°F because this can kill them within a few hours.

Using a reliable thermostat with any heat source is especially imperative with this species since they are prone to overheating.

Given their nocturnal and semi-fossorial habits, dragon snakes don’t require any supplemental lighting.

Ambient room lighting or natural sunlight through a window, kept on a (roughly) 12-hour schedule, is sufficient for your pet to maintain its natural circadian rhythm.

Humidity is the MOST imperative and second most difficult to maintain aspect of captive dragon snake care.

Unfortunately, such high humidity encourages the growth of mold, bacteria, and fungus, which may make your dragon snake sick. As such, you’ll want to stay vigilant in visually inspecting the substrate for mold.

🤓 Expert Tip: You can minimize the risk of mold, bacteria, and fungus by allowing the substrate to dry slightly every once in a while. Additionally, a bottom drainage layer of pebbles or river rocks may also help to keep things sanitary. 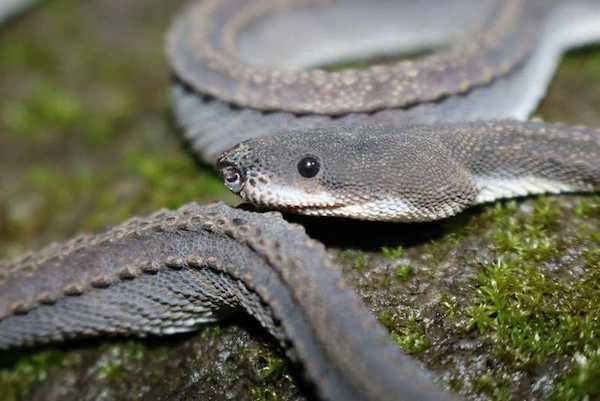 Remember when we said humidity was the second most challenging aspect of dragon snake ownership?

Well, now it’s time to learn about *the most complicated part of caring for a dragon snake*: their diet.

Even if you could get your pet to accept a diet of scented rodents, they’re NOT adapted for the nutrient composition of mice and rats, and probably wouldn’t stay healthy for very long.

Additionally, dragon snakes are incredibly prone to stress. They’re likely to go on a hunger strike when their environment is changed, or they’re handled too frequently.

However, once you’ve ensured these three key aspects are addressed appropriately, your dragon snake should have a healthy appetite:

Once a captive dragon snake’s appetite has kicked in, they are prone to overeating. As their caretaker, it’s YOUR responsibility to prevent them from gorging themselves, which can cause issues ranging from regurgitation to obesity.

Dragon snakes may eat every 1-3 fish or tadpoles every 5-10 days. The prey should not be much larger than the widest point of the snake’s body.

As mentioned before, it’s best to give your dragon snake a large, shallow water dish to hunt in.

Veteran keepers recommend keeping the water level deep enough for the tadpoles to swim comfortably but shallow enough that they can’t jump out of the water bowl.

🤓 Expert Tip: If you find that you’re still having a hard time convincing your dragon snake to eat, try placing the same rock-like water dish under a large hide. Dragon snakes don’t like to venture anywhere that they may feel vulnerable and exposed.

Historically, dragon snakes haven’t done very well in captivity. Experienced keepers are beginning to gradually figure out the little tips and tricks that allow them to thrive.

If you stick to these guidelines, you’ll have a good chance of successfully caring for this elusive and sensitive species.

Alternatively, if you’re looking for an easier species to care for, the Diamondback Water Snake makes a great pet!