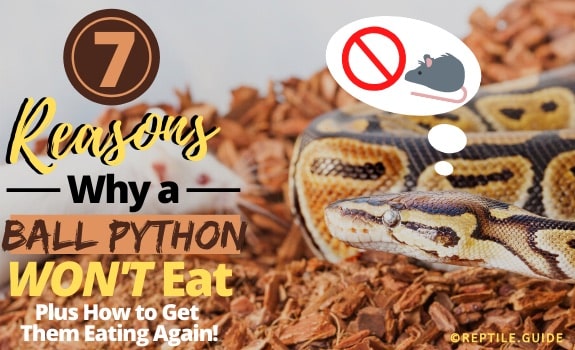 Ball pythons are a common first choice for many people who are new to snake keeping.

In many ways, they make great beginner snakes for the following (plus many more!) reasons:

However one reason that they might NOT make a good pet? Well, the inexperienced snake owner may struggle with their tendency to go on hunger strikes. And let’s be frank, LITTLE ELSE will make a snake lover worry about their beloved slithery pal like seeing him or her go for weeks and weeks without food.

Rest assured, this is a WIDESPREAD occurrence for ball pythons, and it doesn’t always mean that anything is wrong.

You see, ball pythons, like most snakes, can safely go for months without any food.

Of course, this doesn’t mean you should just sit back and let your pet starve. It just means that you have time on your side to figure things out.

Keep reading to find out exactly why ball pythons go through fasting periods, and how you can fix the issue(s).

How Long Can a Ball Python Go Without Eating?

As we mentioned previously, you have a decent amount of time to figure things out.

Almost every ball python can survive for a minimum of six months without a single meal. Many individuals can go much, much longer.

Of course, this is assuming there is not something else going on with your snake’s health and its husbandry needs are being met.

Lack of appetite is one of the BIGGEST red flags when it comes to illness and disease in snakes, so it is essential to rule them out first.

However, sometimes even healthy, well-cared-for snakes will go off feed. But as long as you provide the right conditions and have followed this troubleshooting guide, you can rest assured that your snake will stay healthy until he decides to start eating again.

⭐️ Fun Fact: The longest any snake is believed to have gone without eating is 21 months, and it was – you guessed it – a ball python. Hopefully, this will give you some peace of mind if your ball python has gone weeks or even months without eating.

Now that you have a keen idea of just how long your ball python can sustain itself without eating, let’s dive headfirst into the seven potential reasons why ball pythons won’t eat.

Bear in mind these reasons are simply the most common culprits behind a ball python not eating, so there’s no guarantee they’re why yours is abstaining from food. After all, every snake is different.

However, they should, at the very minimum, give you a fabulous place to start!

Illness is the most pressing reason why your snake may not be eating.

If your snake is displaying any other symptoms, such as diarrhea, discolored scales, wheezing or “clicking” sounds when breathing, or oral or nasal discharge, please take them to a veterinarian straight away.

If the only symptom your snake is displaying is a lack of appetite and they appear otherwise happy, this issue will require a little more deliberation.

Stress often causes snakes to stop eating, and a trip to the veterinarian can cause even more stress and exasperate the situation.

It’s usually better to wait it out unless OR until there are other accompanying symptoms, or it has been several months, and you’ve tried everything else.

Stress is probably the MOST common reason your ball python won’t eat. Fortunately, it can also be the easiest reason to remedy.

This scenario is especially common if you just got your snake, took your snake on a trip, or changed your snake’s enclosure.

Try implementing the following changes over the next few weeks:

Another common mistake, especially with beginner snake owners, is not offering sufficient heat – day AND night!

The basking area should reach 88-92°F, and the cold end of the enclosure should never get any lower than 75°F.

You can use a combination of a heating pad, lightbulb during the daytime, or a ceramic heat emitter to attain these temperatures. How many and what wattage of heating devices you need will depend on the size and type of your snake’s enclosure, and the temperature in your house. You should always use a thermostat with any heating element so that the temperature doesn’t get too high.

All ectothermic (cold-blooded) animals, including ball pythons, need adequately high temperatures to digest. If it is too cold, their body and metabolism will begin to slow down.

NO snake will eat if it’s unable to digest its food. This is a survival instinct because any food that isn’t digested runs the risk of rotting inside the snake and making it sick.

Many ball pythons have a sort of internal clock that tells them to stop eating when Winter is approaching.

In the wild, and with many captive keepers, they will go through a period called brumation, which is similar to hibernation. They will become inactive and stop eating for a few months.

After brumation, most snakes will take at least a few meals, but some may begin fasting again as the breeding season commences.

Females that are ovulating and males that are eager to find ovulating females just aren’t interested in eating. Many healthy captive pythons only eat for a few months out of the year due to these seasonal changes.

Reason #5: They’re Picky About Their Food and Feeding Techniques

With all of the above issues taken care of, still, some ball pythons can be incredibly finicky in how AND what they eat. This is especially true for wild-caught ball pythons.

Luckily, there are SO many captive-bred ball pythons available, this issue is becoming slightly less common.

However, it can still happen with the odd wild-caught or captive-bred python.

When you first purchase your pet, be sure to ask the person that you are buying it from:

I. How often is it eating?

If you are purchasing an older animal that the current owner is only feeding every three weeks, it should be no surprise when the snake doesn’t accept your weekly offering of food.

II. Is it eating live, fresh pre-killed, or frozen?

This is a big one. Some ball pythons are actually afraid of live prey, or they don’t know how to dispatch it efficiently, get injured in the process, and then develop a fear.

In fact, some animals don’t even view an already dead animal as food without having to hunt it down. Other animals develop pickiness about the smell of frozen prey, but will readily eat a fresh-smelling pre-killed rat.

III. How and where are you feeding it?

This is another biggie in terms of what the ball python is used to and what it prefers.

There’s such a wide variety of possibilities here that it can be impossible to predict without having it spelled out for you by someone who has been taking care of your animal.

Some snakes prefer that you wiggle the prey around while it’s offered. Others prefer to be left overnight in a dark paper bag with their pre-killed food. I once purchased a terrestrial gopher snake that, at first, would only accept food if he was “hiding” underwater in his water bowl. He certainly thought he was an anaconda!

Just like you and I have our preferences, so can each ball python, so it’s imperative to get this information from the previous caretaker.

IV. What prey are you using?

Ball pythons typically prefer rats over mice. Some ball pythons will even hold out unless they’re offered an African Soft-Furred Rat, a specialty feeder that is one of this snake’s natural prey items in the wild.

Particularly picky pythons may even turn up their nose if you offer the same type and size of feeder but from a different rattery or supplier.

Reason #6: Their Enclosure is Messy

Cleanliness is one rarely considered factor. Ball pythons in the wild are ambush predators – they wait in burrows for their prey to come to them.

And rodents, their main prey item? Well, they have a VERY advanced senses of smell.

Whenever a wild ball python defecates or sheds, it will leave its burrow and find a new one because the excrements and skin leave behind an odor easily detected by mice and rats.

Some ball python keepers have had success resolving their picky eaters’ habits by thoroughly cleaning the cage after every shed and defecation.

They completely change the substrate and even scrub down the enclosure to remove any trace of the snake’s odor. The theory is that they will eat more readily when they can’t smell themselves.

This might be worth a try if you’re struggling with your own habitually picky eater.

Reason #7: They’re About to Shed

This factor is out of your control, but most ball pythons will NOT eat when they are getting ready to shed.

You can usually tell when this is about to happen by an ashy, dulled out coloration on their scales, and hazy gray-blue eye caps.

In this situation, all you need to do is offer the proper humidity level and possibly soak your snake so that they can shed comfortably.

And once they’ve finished shedding? Simply offer food a day or two later.

Other Tips Techniques for a Ball Python That Won’t Eat

Looking for a little extra help in terms of how to get a ball python to eat? No worries, I’ve got you covered!

Here are some other tried and true tricks that might peak your python’s appetite:

Ball pythons detect their prey with their heat-sensing pits, so go beyond simply thawing that frozen rat and let it sit in a waterproof bag in hot water.

The rodent needs to be much warmer than room temperature to be detected by your snake.

As we discussed before, different snakes have different preferences. You can try these variations, but only try ONE different or new thing at a time.

If you try more than once without giving your ball python a little chance to recover from any possible mealtime stress, it will be much less likely to eat.

Start with any of these suggestions to give your ball python a variety if new prey and scents to spark their appetite:

Again, only try one new method at a time. If your ball python doesn’t eat, wait seven to fourteen days, then try something else.

To add a little a variety into your feeding technique, try one these techniques:

If you’ve followed the above guidelines, you’ve made sure the lighting, heat, and humidity parameters are followed to a T, and your ball python STILL won’t eat, please don’t stress!

Again, I want to reiterate that it is PERFECTLY NORMAL and that most ball pythons start eating on their own again without any intervention.

The most important thing is to not cause additional stress to your snake by trying to force or over-coax them to eat.

Have hope that they will resume eating when they’re ready, watch out for other warning signs of parasite or disease, and don’t stop trying.