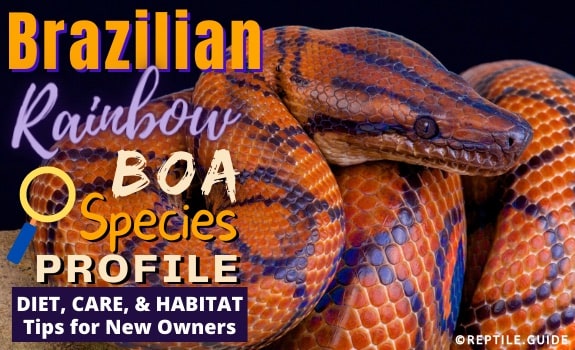 Brazilian Rainbow Boas (BRBs) have been popular pets for many years, thanks to their striking red coloration and beautiful rainbow iridescence.

Unfortunately, many BRBs suffer as a result of their popularity because buyers oftentimes have no idea of the species’ specific care requirements and often end up making their new pet sick…or worse.

While they’re considered an intermediate-level species in terms of care requirements, even people who have never cared for a pet snake (opens in new tab) in their life are capable of providing the proper husbandry for this species – as long as they do the appropriate research!

The good news is that you’re already here and on the right path to learning how to provide the best care for your new, or upcoming, pet Brazilian Rainbow Boa!

They’re also known as the slender boa since they’re much thinner than their Boa constrictor cousins.

Even though it’s often found cruising bushes and branches several feet off the ground, this species is considered terrestrial meaning they spend most of their time in the wild on the ground.

Like most other boa species, Brazilian Rainbow Boas give live birth to litters of 12 to 24 fully-formed babies.

Adult Brazilian Rainbow Boas usually reach a length of 4 to 6 feet and weigh 2 to 5 pounds. In terms of gender differences, huge females may reach 7 feet and 9 pounds!

In contrast, newborn Brazilian Rainbow Boas are 14 to 18 inches long and weigh a mere 15 to 30 grams.

Like most other snakes, Brazilian Rainbow Boas have an impressive life expectancy.

In fact, healthy and well-cared-for boas can be expected to live for over 25 years.

There are even reports of captive Brazilian Rainbow Boas living half a decade!

Still, as long as you do your research ahead of time  before bringing your boa home, this species isn’t impossible for even beginner snake keepers that have their heart set on them.

In fact, one of your first tasks SHOULD be setting up their enclosure prior to adoption.

Most experienced keepers state that, once babies are established, they’re one of the hardiest captive species, and they rarely refuse a meal.

If you’re just getting started with snakes and pick a BRB as your first species, you’ll probably have much more luck with an adult animal compared to a neonate (newborn snake).

After you gain a solid understanding of their care requirements, another critical aspect to consider is the overall cost of ownership.

Smaller neonates and juveniles can be temporarily housed in smaller enclosures, but be prepared to provide your adult BRB with at least a 4’ x 2’ x 2’ enclosure.

Adult animals will make full use of their enclosure’s floor space and height, so if you have the resources to go even bigger, that’s better!

One of the most important aspects of Brazilian Rainbow Boa care is their need for high humidity.

Screen-topped glass aquariums are a poor choice because the screen lid allows moisture to evaporate too quickly, and glass is a poor insulator of heat and humidity.

Brazilian Rainbow Boas are also a shy species. If you reach in from the top of the enclosure, they will likely see you as a predator.

To avoid these complications, the editorial team at Reptile Guide suggests instead using a front-opening PVC or sealed wooden enclosures.

Reaching in from your snake’s “ground level” makes you seem less intimidating, and both PVC and sealed wood are excellent at holding humidity and insulating warmth.

You can recreate a BRB’s natural environment using any of the following:

This species is also notorious for burrowing.

Your pet would certainly appreciate a fine, humidity-friendly, diggable substrate, such as any of the following:

Cork tubes or rounds make for perfect, naturalistic hides, or you can craft one by cutting a hole in a dark-colored plastic box and filing down any sharp edges.

You may also choose to provide a third hide that’s filled with damp sphagnum moss. This will create a microclimate with almost 100% humidity, which is especially helpful for very young snakes and snakes that are preparing to shed.

Like all ectothermic animals, Brazilian Rainbow Boas are the healthiest and happiest when they’re provided with a temperature gradient.

This will allow your Brazilian Rainbow Boa to regulate its own body temperature instinctively.

Lighting for nocturnal snakes, like Brazilian Rainbow Boas, is a frequent debate amongst snake keepers.

While it’s certainly not necessary, several studies have proven that captive snakes provided with UVB lighting had higher levels of Vitamin D3 in their bloodwork.

The fact of the matter is that all wild animals would be exposed to some level of natural sunlight, and they would be able to choose how much exposure they receive.

If you choose to utilize UVB lighting for your Brazilian Rainbow Boa, be sure to use a bulb with a low UV-index, and provide plenty of opportunities to hide and get away from the light. Keep the light mounted at least 12″ from the snake.

Many nocturnal species engage in a behavior known as cryptic basking, where they hide most of their body while exposing maybe a few inches of their body to absorb the sun’s rays. 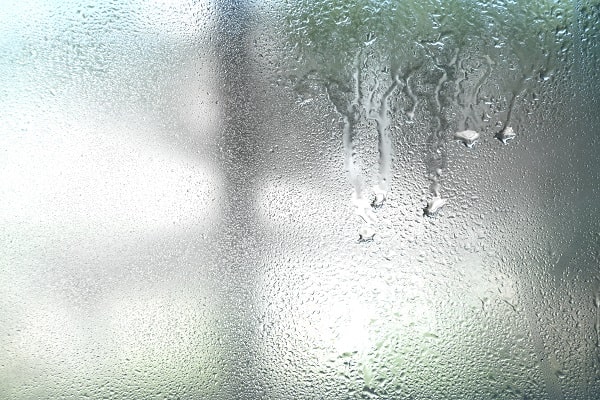 Humidity is one of the most crucial aspects of proper Brazilian Rainbow Care.

This species frequents Brazil’s wet jungle floors, and they will quickly become dehydrated in a low humidity environment.

If you’re using an insulating enclosure with a humidity-friendly substrate and still have difficulty maintaining these levels, try introducing live plants.

Not only do they help to increase the humidity, but live plants also offer your snake enrichment with new textures and smells and provide additional areas to hide and feel secure.

A terrarium misting system is another option.

Despite the need for high humidity, adequate ventilation is still mandatory. Warm, stagnant, humid air fosters the growth of bacteria and fungi – not good!

Instead, utilize adequate ventilation and take advantage of other methods for keeping the humidity level up. It might be more work, but your snake’s health is worth it.

In the wild, Brazilian Rainbow Boas have consistent access to large water bodies, where they can fully submerge their bodies and even swim.

Reptile Guide recommends providing a water dish inside the enclosure that’s large enough for your snake to soak its entire body.

Remember to place the dish on the cool side of their enclosure because water will evaporate and raise the habitat’s humidity level if the dish is kept under a heat source!

As a general rule of thumb, feed one prey item that is 1.25 times the width of the widest part of your snake’s body with the following frequency:

Like most snakes, the primary illnesses that affect Brazilian Rainbow Boas are related to husbandry.

Improper temperature or humidity can result in anorexia, stuck sheds, and respiratory infections. Moreover, dirty enclosures can result in scale rot and abscesses.

Luckily for you, since you’ve read this care sheet, you have a solid understanding of the appropriate temperature gradient and humidity level to prevent husbandry-related illnesses in your Brazilian Rainbow Boa.

Always spot clean waste as soon as you notice it, and consider changing out all of the substrate every 1 to 3 months.

Although these snakes require high humidity, allowing your substrate to dry out before remoistening it will prevent the growth of mold and anaerobic bacteria, which can also cause your snake to become sick.

Neonate Brazilian Rainbow Boas are naturally defensive and nippy. Can you blame them? They’re so tiny; everything is a giant threat to them!

Luckily, babies are so small that their teeth typically can’t break human skin.

Don’t let their initial defensiveness deter you from handling your pet.

In fact, getting them used to you as a baby means they’ll be less likely to bite you as an adult – when their bite actually matters because it hurts!

In their enclosure, most Brazilian Rainbow Boas are relatively inactive.

They usually prefer to stay hidden or burrowed during the day.

If you’re a lucky night owl, you may be able to see them exploring their enclosure at night.

The more enrichment opportunities you create, the more likely they are to use them!

While Brazilian Rainbow Boas are typically a shy species, they certainly don’t mind being periodically handled.

Once your snake is settled in, you can handle it 3 to 5 times per week, for around 20 minutes at a time.

Of course, you should gradually work up to these levels, following your Brazilian Rainbow Boa’s comfort or stress cues.

Wash your hands before handling your snake to remove any irritants or potentially appetizing scents.

Always handle it in a well-lit room without any other pets present. Small dogs and cats have a high likelihood of triggering your snake’s feeding response.

Support its body as much as you can, and avoid allowing it to grab hold of anything dangerous or that it could use to anchor itself somewhere you won’t be able to get to it.

Their burgundy backs feature irregular black-outlined rings that are sometimes connected and solid black or bulls-eye circles along their sides.

Rainbow boas are named after the beautiful rainbow-like iridescence that their scales reflect in the right lighting, especially after a recent shed.

Unlike Ball Pythons, most Brazilian Rainbow Boa morphs are relatively new, and the genetics aren’t fully understood. Some morphs come with a price tag of over $4,000!

Brazilian Rainbow Boas are popular pets thanks to their:

Still, they require knowledge and a level of care that is a step above simpler snakes like corn snakes.

While they require fairly specific care parameters, once you’ve gotten their temperature and humidity consistently dialed in, this species is reasonably easy to care for!

But if you’re curious about owning other “rainbow” snakes, then check out the rainbow python or our comprehensive rainbow boa care guide.

Alternatively, if you are already an intermediate or advanced reptile keeper, then maybe the emerald tree boa can be an interesting new challenge for you.

Get a FREE Digital Reptile Thermometer When You Purchase a Reptile Pet on XYZReptiles! 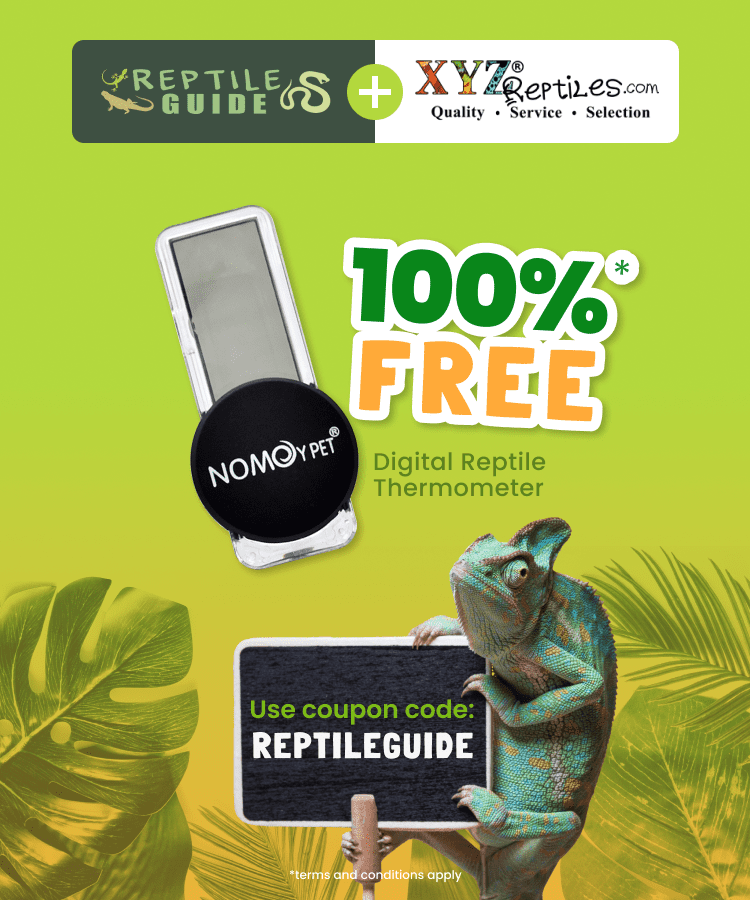 Available for a limited time only!

We're giving away a totally FREE digital reptile thermometer when you make your next purchase of a reptile pet with XYZReptiles.

To get this offer, click the button below and use the Coupon code 'REPTILEGUIDE' during checkout. A free thermometer will be added to your cart (with FREE shipping)!