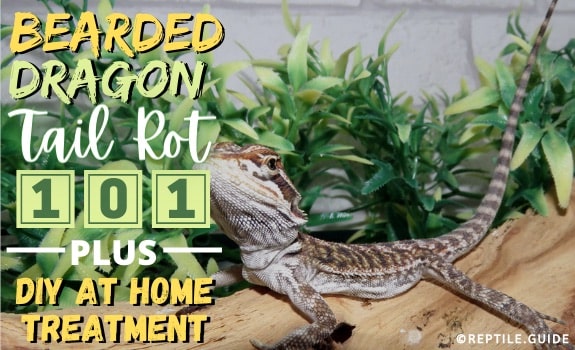 Imagine what it would feel like if a part of your body started rotting from the inside out?

Imagine waking up one day and noticing that this part of your body was only getting more numb and black with each passing day. Pretty scary stuff, right?

Unfortunately, this HORRIBLE experience is a fairly common one for many bearded dragons, seeing as often times tail rot can go unnoticed by owners for some time.

This article will focus on educating you on a wide variety of topics related to bearded dragon tail rot, including:

So, if you’re looking to gain some clarity on a troubling dark spot on your bearded dragon’s tail or are simply trying to learn all that you can in an attempt to be a proactive owner, then just keep reading!

What is Bearded Dragon Tail Rot?

Tail rot is a serious condition in which the tail of a reptile begins to actually rot away, due to an internal infection.

The tail will actually fall off if not attended to, and can even spread the infection up into the body, damaging internal organs.

If left untreated tail rot will most certainly spread and can cause other serious health concerns as well.

Unfortunately, because tail rot is the result of an infection, bearded dragons can die from it.

If the infection is left untreated, it can spread via the bloodstream to the rest of the body and attack healthy tissue in vital organs such as the heart and lungs.

Also, if your dragon is severely malnourished and not getting enough calcium (opens in new tab) their bones can become weak and lead to tail rot as well.

Additionally, dragons that don’t receive sufficient UVB exposure can also experience tail rot as they will not be able to properly digest calcium and can weaken their bones as such.

What Does Tail Rot on a Bearded Dragon Look Like?

Tail rot will appear as if your bearded dragon’s tail is black, decaying, and dried out. Typically, tail rot starts at the tip of the tail and works its way up.

Now, tail rot is not to be confused with dragons that naturally have a dark tail, as this is fairly common and totally normal.

A naturally dark tail will not appear decayed or dried out.

Do Bearded Dragon’s Tails Grow Back?

To answer the question, “Can bearded dragons drop their tails?” let me put it bluntly… ABSOLUTELY NOT.

If a bearded dragon’s tail has dropped (read: fallen off), then it is to be looked at with much concern and ruled as the result of poor health.

You see, unlike other reptiles that drop their tails and grow them back, bearded dragons are not capable of regrowing a tail.

Unlike the leopard gecko which is notorious for dropping his tail and beginning the regrowth process in a matter of days, the bearded dragon’s tail is gone forever the moment it or a part of it falls off.

It isn’t uncommon for bearded dragon owners, especially those who are new to have some concerns during sheds. And this becomes particularly common during rough sheds.

During sheds, a bearded dragon’s scales become dull and have a dead-like look to them, because well, much like in the instance of tail rot… the skin IS dead.

That’s why it’s being shed in the first place.

When it comes to telling the difference between a normal tail shed and tail rot, keep the following in mind:

Assuming your bearded dragon was healthy when you adopted him or her, the main thing you can do moving forward to avoid tail rot is make sure their enclosure and diet are spot on!

If bearded dragons don’t receive enough nutrients and UVB, their bones can become weak, leading to issues such as tail rot.

If your bearded dragon’s habitat and their diet are good, then that’s more than half the battle to preventing tail rot.

However, something else to be aware of is the potential for injury to your dragon if they are housed with another dragon…

Often times many people will house dragons (especially babies) together. When this happens, dragons can actually become aggressive and bully one another, often times biting each other in various places, especially the tail.

So, as a general rule of thumb just house your dragons separately, even if they were from the same clutch.

Another cause of tail rot is shed that doesn’t come off properly from the dragon’s tail.

Rather than pull off shed thinking you’re doing your bearded dragon a favor, make sure you understand the SAFE ways to help a shedding bearded dragon.

Lastly, because tail rot commonly occurs after trauma to the tail, make sure there isn’t anything in your bearded dragon’s vivarium that could potentially harm or pinch their tail.

Secure all loose fixtures and make sure dragons have plenty of room to move about.

How to Tell if My Bearded Dragon Has Tail Rot

If your bearded dragon is suffering from tail rot then the first obvious sign will be the darkening of their tail.

Many bearded dragons can have dark tails naturally, but those that develop a blackening of their tail are most likely either stressed OR suffering from tail rot.

If you believe your beardie is simply stressed, then there are things you can do to destress them.

It’s not uncommon for new bearded dragons can be stressed as they acclimate to a new home and owner.

Additionally, bearded dragons with tail rot may also stop eating and show black beard more frequently than what you are accustomed to.

So, if your beardie’s tail is looking different and he or she is also acting different… take action right away!

How to Treat Bearded Dragon Tail Rot From Home

If you suspect your bearded dragon has tail rot, the BEST thing you can do is to take them to a respectable reptile vet ASAP.

The vet should be able to tell definitively if your dragon has tail rot just by looking at the condition of the tail, and may even run some tests to be certain of the nature and source of the infection.

Upon diagnosis, the vet will either prescribe your pet antibiotics to try and kill off the infection OR recommend surgery, in which part of your dragon’s tail will be amputated.

Now, if you don’t have the money for a visit to the vet, there is a home remedy (discussed below) you can try in an attempt to cure the tail rot.

However, it is important to note that the effectiveness of at home treatments will vary on a case by case basis and stand the strongest chance of working in cases of tail rot that are caught early on.

There is NO guarantee this remedy will work, but it is better to try them than nothing if you can’t afford a vet visit.

However, if this remedy does not seem to be providing some relief within one to two weeks… take your dragon to the vet. No ifs ands or buts about it. They need medical help.

First, find a shallow dish that will allow you to submerge your dragon’s tail. A good rule of thumb is to be able to submerge the tail about an inch above the visible tail rot to ensure it is fully submerged.

Next, fill it with 3 parts water and 1 part Betadine. Mix it until you have a mixture that resembles tea.

Grab your dragon and sink the rotting parts of their tail (plus that extra inch) into the mixture for 5 minutes.

If your dragon is squirmy, you’ll want to try doing this in sessions until you hit that 5-minute mark.

After you reach the 5 minute mark, dump out the mixture and VERY gently dry your dragons tail with a paper towel.

Remember, the tail is already very weak and brittle so do not apply more force then needed.

After the tail is dry, apply a little Neosporin (do NOT get the kind that provides pain relief) and place them back in their habitat.

Repeat this process 2 to 3 times a day for at least one week, but ideally two.

Now, if you’ve tried If you’ve tried the above remedy to no avail OR if the tail rot is severe, then you will need to take your pet to a respectable reptile veterinarian.

From there, there will likely be 2 courses of possible action depending on exactly how severe and how progressed the infection is…

Hopefully, if  you’ve come to the point where you are needing to visit the vet, the infection isn’t so serious to where an amputation is necessary. This is one of the reasons why getting to the vet immediately is recommended.

Now, it should be noted that while an “antibiotics only” approach is ideal, antibiotics can still be quite harsh on your bearded dragon’s delicate internal organs, such as their kidneys.

Because of this, it is recommended you ask your vet FIRST about the possibility of running a test or two to determine what the actual source of the infection is,

Getting that proper diagnosis ensures your beardie isn’t loaded up with unnecessary antibiotics.

Once your vet has determined the cause of the infection and prescribed the medication, make sure your bearded dragon stays hydrated as this will help keep their kidneys better process the strong medication.

In addition to this, it is advisable to offer an immunity booster as well. This can help if your dragon suffers from a repressed appetite after or during treatment.

You can also make them a nutrient dense slurry to boost their appetite and fuel their body!

Although the thought of such a small, delicate creature undergoing surgery is by no means comforting, often times surgery is the only cure for your bearded dragon’s tail rot.

In terms of what you can expect, a vet will typically want to amputate part of your dragon’s tail if the tail rot has progressed enough.

Also, in dragons where tail rot is caught early and is seemingly afflicting just the tip of the tail, amputation is a good option because it allows for minimal tail loss while cutting off the infection before further spread.

Typically, you can expect anywhere from half an inch to an inch above the rot to be cut off.

However, your vet may advise more of the tail should be cut off depending on what they see in an X-Ray.

Often times, bearded dragon’s bones in their tails can appear wavy or curved in an X-Ray, but this isn’t always a sign of concern.

As such, don’t necessarily let your vet insist on cutting off more than what you’re comfortable with.

Wavy bones often occur from fractures due to low calcium or insufficient UVB exposure as a youth, and aren’t necessarily related in any way to tail rot.

In terms of what you can “expect” when your dragon comes out of surgery, definitely be prepared for them to be lethargic for a few days and a little wobbly and awkward when moving around.

You will also likely have to continue giving them some medication here and there, followed up with another trip to the vet to remove any stitches and check on the tail.

It is my hope that by now you have been given the clarity you were seeking on all things bearded dragon tail rot. Hopefully you will be able to take this information and move forward accordingly.

And while tail rot is by no means something to ignore, rest easy in knowing that as long as you are paying attention to your beardie’s physical state, it is pretty easy to catch early on.

At the end of the day, being preventative will ALWAYS be your best bet at ensuring the overall health of your bearded dragon’s tail.

Practice being tail rot prevention by:

23 thoughts on “Bearded Dragon Tail Rot: What You Need to Know to Save a Life…”