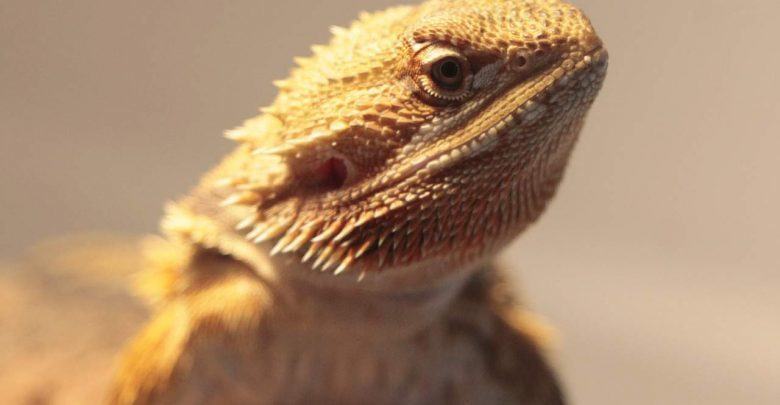 Much like us, bearded dragons can become backed up, unable to pass a much-needed bowel movement.

However, unlike us… impaction for a bearded dragon is a much more serious issue than simple constipation or bloating that almost always subsides shortly.

Whereas we might pop a Tums or eat a banana, a bearded dragon suffering from impaction doesn’t have such an easy and quick solution to clearing out their blockage.

Seeing as how the solution to clearing up bearded dragon impaction isn’t exactly clear cut, this ultimate guide will serve as a resource to help you both prevent impaction and cure it.

What is Bearded Dragon Impaction?

Impaction is a serious condition in which a bearded dragon’s digestive track is unable to fully pass bowel movements due to a blockage of either a solid or semi-solid mass.

Unfortunately, there are many things that can cause impaction in a bearded dragon, from using risky substrate, to using hard-to-digest feeders, to inadequate temperatures in the tank, and much more.

Take a look below at how each of these hazards (plus a few more!) can lead to impaction issues…

Using Particle Based (AKA loose) Substrates

Unfortunately, not all substrates are considered equal! Loose particle substrates, such as Calci-Sand, play sand, and pellets have all been associated with impaction.

Over time, your bearded dragon can consume enough of the substrate to cause a blockage.

Your dragon can consume this substrate on accident when hunting their feeders or when even eating their greens if they aren’t kept tidy in a dish. 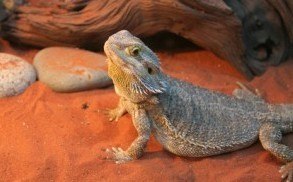 Also, it should be noted that many manufacturers of these hazardous substrates make bold and false claims on their package, stating that their product is “digestible” or “safe”. Don’t believe this malarkey!

Sadly enough, there is little to no regulation on reptile products, which allows for manufacturers to make irresponsible claims.

The best substrate options for bearded dragons are going to be ceramic tile, reptile carpet, paper towels, or newspaper.

​Learn more about what substrates are safe for your pet HERE.

If your dragon’s tank doesn’t have the right temperatures, they will likely have a very difficult time digesting their food. As such, it is imperative that you ​keep the temperature under control at all times. 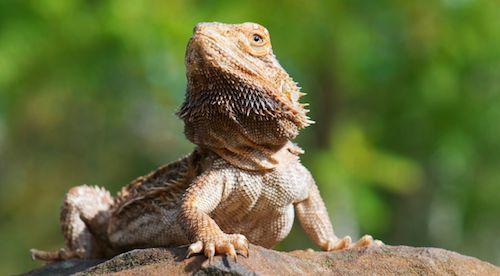 As a general rule of thumb, your adult bearded dragon’s basking spot should be between 95 and 105 degrees.

Also, something to be cognizant of is ensuring your bearded dragon has access to their basking spot for at least an hour after they eat.

Because of this, I recommend you don’t feed your dragon at night right before you turn his lights off, but instead, feed him at least one hour (if not several) before bedtime.

There are two reasons a feeder (i.e. live insect) can be difficult to digest and lead to impaction.

The first is size, the second is the type of shell they have.

When it comes to the former, a good rule of thumb is to never give your bearded dragon a feeder that is wider than the space between your dragon’s eyes. 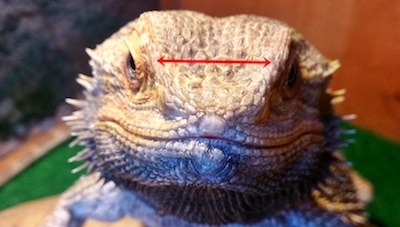 In regard to troublesome shells, insects such as larger crickets, mealworms, and superworms can pose threats to your dragon’s digestive track if eaten too often.

Baby bearded dragons should never be given any of these types of feeders, whereas adults should only be given them very occasionally as a treat.

Check out the best live food for your bearded dragon HERE.

Signs Your Bearded Dragon May be Impacted

The first and most obvious sign of impaction will be that your bearded dragon stops going to the bathroom.

Most bearded dragons will have a bowel movement every one to two days.

If your dragon hasn’t gone to the bathroom in days and also isn’t acting like their normal self, you definitely have cause for concern.

A more serious sign of impaction issues could also be a loss of mobility in your beardie’s hind legs.

If your pet is dragging his or her back legs as they move about, definitely take action to determine what is causing the issue.

A bump along the back of your dragon could also indicate issues with impaction as well.

How to Clear Impaction in Bearded Dragons

In minor and early cases of impaction, you can often times help your beardie have a bowel movement by acting quickly.

If you suspect your bearded dragon is impacted, draw a nice warm bath for them and consider filling it a little more than usual to allow them to swim a bit.

Making sure to keep a close watch on your dragon, be prepared to wait for up to 30 minutes or so for your dragon to do the deed.

It may happen quicker than this, but 30 minutes is a good amount of time to allot.

Also, you can very gently massage your dragon’s stomach and cloaca to encourage a bowel movement.

If despite your best efforts you dragon still isn’t going to the bathroom, then you may need to just take him or her to the vet. 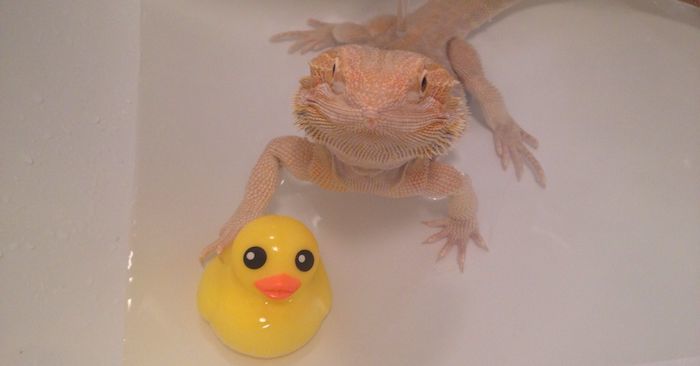 However, if a vet is out of the question for you or you can’t get in right away, check out some other treatment options in the next section below.

Along with warm baths and massages daily, there are a few other measures you can take to try and attempt to get your dragon to go to the restroom.

To help move things along, consider putting a couple drops of olive oil on your dragon’s nose for them to lick off. It is very important that you don’t opt for vegetable oil, however, just olive oil.

If your dragon is impacted, avoid feeding them any feeders as this may only add to the impaction. Instead, keep their diet filled with relatively soft foods that can be easily digested. Here are some suggestions…

If your dragon goes longer than a week without pooping and the above measures don’t result in a bowel movement, I recommend taking them to see a vet.

A vet will be able to take an X-ray and determine the severity of the impaction and develop a treatment plan from there, be it laxatives, an enema, or surgery. 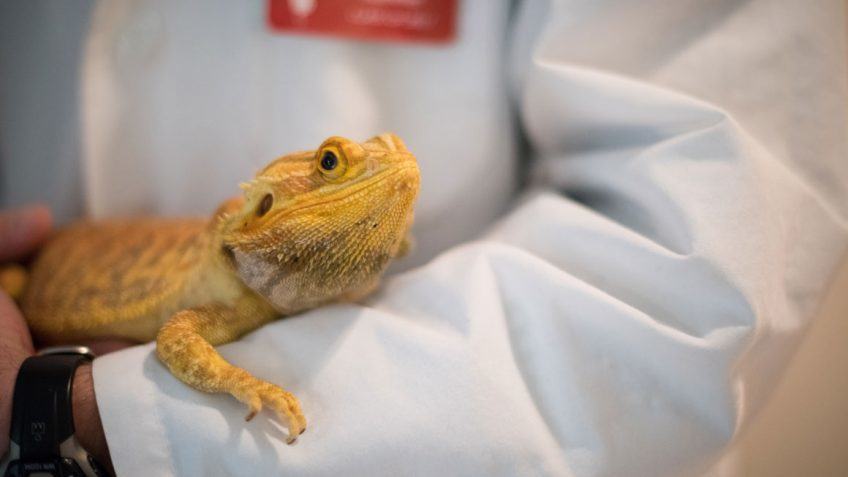 If none of your efforts to produce a bowel movement seem to be working, then it is imperative you get your dragon to a herp vet right away.

If the vet can’t seem to clear the blockage via enemas or laxatives OR they simply determine the blockage is significant, then surgery will likely be your only option.

As far as the cost of surgery, you can generally expect prices anywhere from $300 to $1200 depending on the area you live in and the vet you go to.

If these prices seem out of your price range, fret not as most vets will offer very reasonable payment plans that make even expensive surgeries affordable. 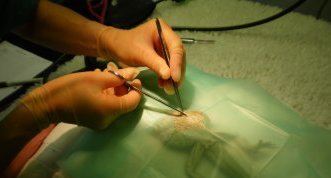 It’s important to realize that impaction doesn’t have to mean the end of the road for your sweet bearded dragon.

And although impaction can lead to death, there are so many treatment options and home remedies worth looking into to get your little guy or girl back on track and feeling great in no time.

Just be patient, exhaust your options, and if all else fails… be open to paying the vet a visit. If you’re willing to do whatever it takes, chances are your pet will be just fine in no time.

How to Tell If Your Bearded Dragon is Sick: 10 Warning Signs You Must NOT Ignore