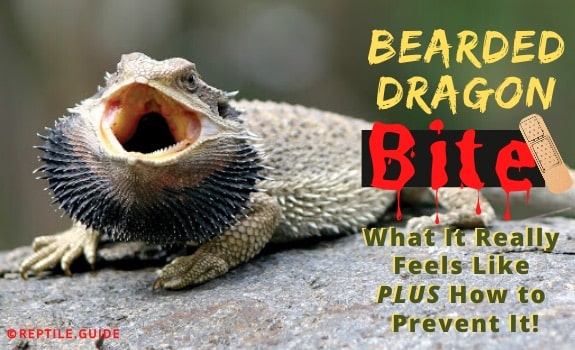 A common concern for many first time owners (especially those with children) is whether or not bearded dragons bite.

After all, it only makes sense that you’d want to protect your family and yourself before welcoming a new pet home.

Snakes, turtles, and large lizards like iguanas are often (and sometimes unfortunately) associated with painful bites.

But what about the bearded dragon?

Does this typically docile and chilled out lizard have a tendency to bite?

And if so, how serious of an injury or pain can it cause?

To cut straight to the chase, YES bearded dragons can in fact bite. However, this is definitely not a common behavior and they won’t go out of their way when feeling threatened to bite you the way a dog or snake might.

They’re simply NOT aggressors. However, that doesn’t mean that as an owner you will never get bit, if even on accident. As such, be sure to read on to discover everything you need to know about a bearded dragon bite.

From how much it hurts to how to avoid it and treat it, this article has got you covered!

In short? Not really. Can they draw blood or break the skin? Sure. But as someone who’s been scratched up by a cat, I can tell you there is NO comparison.

Often times when I’ve been bitten by a bearded dragon it’s been as a total accident. My beardies weren’t trying to bite me and certainly weren’t feeling aggressive.

Instead, they simply mistook my finger for food or just missed the food entirely. And in all instances, I think the bite only drew blood once.

If anything, a bearded dragon bite is more alarming than painful! Pain is certainly not something to be concerned with.

To prove that their bite really isn’t all that bad, please see the video below of Steve Irwin (R.I.P.) being bit on the nose by a bearded dragon!

As sensitive as the skin on our nose is, if their bite was very strong I reckon Irwin’s response would have likely been one of less amusement and more discomfort has it really hurt much!

Now, just because bites don’t tend to hurt much or happen too frequently, that doesn’t mean the bearded dragons will never bite. Check out the main reasons below behind why a bearded dragon might bite you or someone else.

Maybe they have a favorite feeder they only get as a treat once in a blue moon or maybe they really look forward to their greens every morning. Whatever the reason, bearded dragons that are overexcited can nip you by mistake.

Obviously this is not something you’ll want to be dealing with all the time. So if for some reason you find it happening frequently, simply try changing up your feeding strategy a little bit.

Consider feeding them with feeding tongs instead of your fingers. You could also try picking them up and placing the salad in their tank without them in it.

It shouldn’t be hard to find simple ways to avoid getting nipped by even the most excited of beardies.

Remember those early days when you brought your bearded dragon home and they were just a tiny little thing?

Remember how they seemed wary of you or maybe even hissed when you came too close to them?

It’s instances like this where they may be more likely to bite.

However, with all of this being said, it is not likely that your bearded dragon will come right out and bite you without warning.

Chances are, they will likely hiss and puff up their beard as a warning to you first. So, pay attenti0n!

Reason#3: You’re Doing Something & They Want You to Stop

Much like any other creature, even bearded dragons can have a breaking point if they become agitated if you continue doing something they dislike.

For instance, maybe you’re refusing to put them down and are instead forcing them (bad) to have a cuddle.

Or perhaps you’re simply poking and prodding at them (really bad) causing them to become annoyed.

Either instance will naturally lead to a bite at some point as they try to communicate to you to simply knock it off.

But, can you blame them? If their body language is saying “STOP!” and you continue doing something, well, you probably deserved the bite my friend.

Reason#4: You’re Mishandling Them or Hurting Them

Like most animals, there is a correct and incorrect way to hold a bearded dragon. Obviously, you should NEVER pick them up by their tail or limbs.

Furthermore, you’ll want to avoid swooping in from above to pick them up as this kind of motion can remind them of a large bird, a natural predator for them in the wild.

You’ll also want to make sure you’re not squeezing them or pinching them too tightly as they can be quite fragile.

To pick them up the RIGHT way, simply reach for them slowly from the front or sides. Hold them firm enough that they can’t jump and get away, but not so firm that they feel uncomfortable.

Also, make sure to support them under their belly with ideally two hands.

🤓Expert Tip: All children handling a bearded dragon would do best with a little adult supervision to avoid any accidents. Often times children can drop bearded dragons if they’re bitten or surprised by them, leading to injury. To avoid this, sit on the ground with your child as they handle your pet.

Reason#5: They Haven’t Been Properly Socialized

If you’ve ever encountered a feral cat or kitten, then you know firsthand just how important socialization is when it comes to human-animal relationships. And with bearded dragons, it’s no different!

Bearded dragons that haven’t been properly socialized can be wary and defensive towards people, even to the point of biting.

Whether they were never handled much prior or mishandled, socialization is KEY to ensuring ideal temperament.

This is just one of the MANY reasons why it is so important to only adopt a bearded dragon from a reputable breeder.

Responsible beardie breeders know the critical role socialization plays. As such, they will frequently handle their beardies to ensure they are comfortable being picked up by people.

One thing you can do to help ascertain whether your bearded dragon might be a “biter” or not, is to handle them prior to adoption. Have the breeder, vet, or rescue show you how to pick them up and give it a go.

Now, their temperament may change some once you get them home and they find themselves adjusting to a new environment.

However, this initial interaction should, at the very least, give you some confidence in how to handle them properly and provide insight into their temperament when they’re in a familiar environment.

Just as a hungry dog might nip at your hands when offering a treat, bearded dragons too can accidentally bite when hungry.

Now, there are truly several reasons why a bearded dragon might bite you…

For starters, your hands could simply smell like food. Or perhaps your finger bears an uncanny resemblance to a worm.

Maybe they’re just used to always being hand-fed and assumed you had food when you didn’t?

They could also just be totally derpy and clumsy and miss your hand when going for a feeder.

Regardless, all of these possible reasons are totally innocent mistakes. By ensuring your bearded dragon has a normal feeding schedule and is eating enough, you really shouldn’t have to worry about this.

Is a Bite From a Bearded Dragon Dangerous?

Bearded dragons are not poisonous creatures and with such small teeth, there really is no need to worry about any potential dangers that come with being bitten.

Now, they do naturally carry salmonella and this can be transmitted to humans BUT this is extremely rare. Additionally, in the instances where it has been transferred it has almost always been through their stool. Not bites.

The odds of getting salmonella from a bearded dragon bite are so low, it really isn’t worth worrying about. This is especially true if you follow the precautions outlined below…

How to Treat a Bearded Dragon Bite

How to go about treating a bearded dragon bite will ultimately come down to whether or not the bite actually broke the skin.

If the bite was gentle enough that the skin didn’t break, simply wash your hands with soap and water as you always should after handing your beardie.

Now, if the bite DID in fact break the skin, treat it as you would any other scratch or cut. You’ll want to wash your cut with warm water and soap immediately and then disinfect it.

Make sure you don’t skip over disinfecting a bearded dragon bite. As aforementioned, it is extremely unlikely that you would contract salmonella like this, but it certainly is not worth risking. It also isn’t worth risking infection.

After you’ve disinfected the bite with alcohol, Neosporin, or any other appropriate disinfectant, simply bandage it and you’re good to go. It might sting a tiny bit, but this is normal.

Also, please try to bear no ill will towards your bearded dragon if they did in fact bite you. I can’t tell you how many times I’ve been bitten accidentally by beardies over the years who really meant me no harm.

So, there you have it. It is my hope that by now you feel reassured that a bearded dragon bite really is nothing to be too concerned with.

Besides being pretty painless overall, a bearded dragon bite also poses virtually no health risks… so long as you simply treat it properly.

The main thing to remember is that, if your bearded dragon bit you, there is most certainly a reason for it! Being educated on why bearded dragons bite will help you prevent bites in the future and build your confidence and bond with your pet.