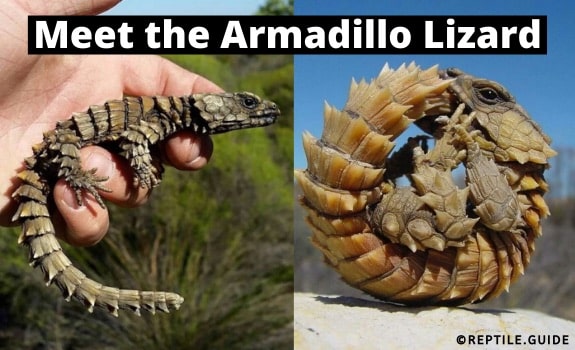 Few animals that roam the Earth today come as close to looking like a real-life dragon as the armadillo girdled lizard (Ouroborus cataphractus).

This cute, armored little lizard (opens in new tab) is native to the deserts of South Africa. Their yellow or brown body is covered in thick, protective, square-shaped scales that armor their bodies.

They have complex social lives, compared to other lizard species, and they live for over ten years!

Despite their robust exterior appearance, Armadillo Girdled Lizards are a timid and docile species. When confronted, they prefer to escape or curl into a protective ball – like an armadillo!

Mix all of these characteristics into the armadillo girdled lizard’s petite body, add some irresistible, puppy dog-like eyes, and you’ve got a recipe for the pet dragon that everyone has always wanted!

To learn more about this fascinating AND utterly adorable reptile that has stolen the internet’s heart, just keep reading!

Where Do They Come From?

Armadillo girdled lizards are endemic to the desert areas along the West coast of South Africa. More specifically, they live in the Succulent Karoo desert ecoregion.

Their favorite habitats are full of rocks, hills, mountains, and sandstone.

These lizards live in social groups of up to sixty individuals! They can typically be found sunning on rocks near cracks and crevices, which they will attempt to escape to if they sense a threat.

In fact, their absolute favorite habitats are full of rocks, hills, mountains, and sandstone. However, they will travel away from their sandy, rocky outcrops to find food in nearby grasslands. At least up to sixty feet away, anyways… so not terribly far!

Males are territorial, and they will carve out a specific plot of land to protect from other males in the group. They will mate with the females that are in their territory.

There is A LOT of movement between the large social groups for males, females, and even juveniles. They aren’t necessarily bonded to specific individuals in the group, like wolves or dolphins. Instead, they simply find safety in large numbers.

How Big Do Armadillo Lizards Get?

We weren’t kidding when we used words like “precious” and “petite”! These lizards rarely grow over four inches long, with three to three and a half inches being more common.

Males tend to be slightly larger than females. Their tail makes up for about half, or less, of their total length. Just imagine a little dragon that fits into the palm of your hand!

What Do They Eat?

Armadillo girdled lizards are primarily insectivores, although they may occasionally eat leaves and fruit.

Their food of choice is termites. In fact, their vulnerable population is believed to fluctuate with the local termite population.

They’re also NOT opposed to eating other invertebrates, like

During the dry season, when termites and other invertebrate food sources are quite scarce, armadillo girdled lizards enter a period of inactivity, and their metabolism slows down significantly. They lose a drastic amount of weight, but they recover quickly when the rainy season returns.

Another unusual social behavior of this species is the tendency for the mother to bring food to her baby or babies.

How Many Babies Do They Have?

As we mentioned, males are territorial and will defend a plot of land while mating with females that inhabit that plot. Meanwhile, the females frequently visit the territories of different males and breed with multiple males in a breeding season.

The males are protective of their land, but NOT of individual females.

Breeding typically takes place in the spring (September to October, for that geographic region). In the summer or early fall (March to April), the female will give birth to one or two live babies.

Armadillo girdled lizards are one of the few lizard species that are ovoviviparous, meaning the egg develops inside the body. The baby is born already hatched and fully developed. The babies are roughly half the size of their parents, and otherwise, look identical.

Many females even take a gap year between reproductive years, magnifying their slow reproduction rate and diminished wild population.

Do They Have Any Predators?

Armadillo girdled lizards have many predators in the wild, ranging from large carnivorous mammals to birds of prey.

They rarely bite, even to defend themselves. However, these lizards will bite their own tail to maintain their rolled-up self-defense position, which they can stay in for up to an hour.

Their defensive position and armored scales can deter all but the largest and strongest of predators.

Unfortunately, they can’t run away very fast, which is why they’ve developed their armor and armadillo-like defensive behavior in which they roll into a ball (not unlike a ball python). Regardless, living in large groups means that there are more eyes to look out for predators.

When one lizard detects a potential threat, it will attempt to quickly hide in a rock crevice. The other lizards living in the group will follow suit.

Are They Rare in the Wild?

Armadillo girdled lizards were only recently downgraded from an IUCN vulnerable status to that of least concern.

It became illegal to collect them in the wild when they became classified as vulnerable. Since the pet trade collection was the primary cause of their decline, their population has been steadily growing thanks to the protective laws in place.

Additionally, since their population depends so heavily on the local population of termites, environmental variations such as decreased rain, invasive species, and poor climate can cause their numbers to dip in the following years.

This little dragon’s unique, cute appearance and their slow, harmless defensive behaviors have been the downfall of this species’ survival in the wild due to their appeal as pets.

Now is our chance to reverse that ideology and use those reasons as ammunition to protect this precious species in its native habitat. It would be truly devastating for the world to lose one of its only “real life” dragons.

⭐️ Fun Fact: Did you know? Unfortunately, most Armadillo girdled lizards in captivity are taken from their wild home because their care and breeding in captivity are not easy. This irresponsible behavior has contributed in the past to their species overall vulnerability in regard to their numbers in the wild.

Where Can You Buy One?

While armadillo girdled lizards can occasionally be found for sale in the pet market, most of these specimens were illegally removed from their wild habitat.

Unfortunately, purchasing an illegally poached animal perpetuates the global black-market pet trade that the world is currently struggling with.

Since these precious little dragons are struggling in the wild, this species is probably BEST observed through photos and videos on the internet or in a zoological facility helping to grow their population.

Additionally, wild-caught individuals tend to have a hard time adjusting to captivity. They may stop eating or simply fail to thrive. Any minor parasite, fungus, virus, or bacteria they may naturally carry will take the opportunity to multiply and overwhelm the lizard’s body and health.

Finally, as we mentioned above, this species can be challenging to care for in captivity. It’s difficult, if not impossible, to provide the preferred diet of termites.

They should be housed as a group with one male and multiple females to cater to their social behavior without causing the male territorial stress.

However, if you keep your eye out on online reptile classifieds and at reptile shows, you may be able to find captive-bred armadillo girdled lizards.

Make sure to research the breeder and seller, so that you know they’re reputable and that your new pets were ethically sourced and not removed from their native habitat.

Be warned, it can take months or years of searching for a captive-bred armadillo girdled lizard. Since they are challenging to breed and ONLY produce one to two young a year, they cost a pretty penny, frequently over $1,500 each.

✅ Buyer’s Tip: Don’t want to spend $1,500+ or wait potentially YEARS for your very own reptile companion? No fear! Any of these beginner-friendly lizards make just as good (if not BETTER!) pet options than that of the difficult to care for Armadillo girdled lizard.

Dragons Thrive In Their Natural Habitat

Imagine if we discovered REAL dragons living in our world?!

Would you want to preserve their existence and habitat, enjoy the artwork of professional wildlife photographers, or maybe even go on a safari to see one yourself – roaming its wild range and exhibiting its natural behaviors?

Do you think it would be wise to bring the dragons into captivity while knowing almost nothing about what it needs to survive?

And with no way of knowing how many exist, who’s to say they aren’t harvested to extinction in the wild?

Perhaps the people who keep them aren’t successful. And just like that, we lose a species. And while these adorable little lizards aren’t real dragons, they look a lot like them and as such should be treasured AND protected!

On top of this, they have SO many unique traits that aren’t found in many, if any, other species – from their live bearing reproduction and maternal care to their social colonies and roly-poly tendencies.

It’s natural to want to have one of your own, but imagine if our desire to keep these beauties in captivity lead to the demise of their existence in the wild, and, eventually, in captivity too?

Armadillo girdled lizards are a species to be admired, treasured, and protected.

Luckily, you don’t need to keep one in your own home to do this! Spreading education amongst the public about this lizard’s plight can go a long way towards preserving the species.

And should you still desire a mini dragon lookalike of your own? You can always consider the more accessible and equally medieval looking Red-Eyed Crocodile Skink or a Bearded Dragon.