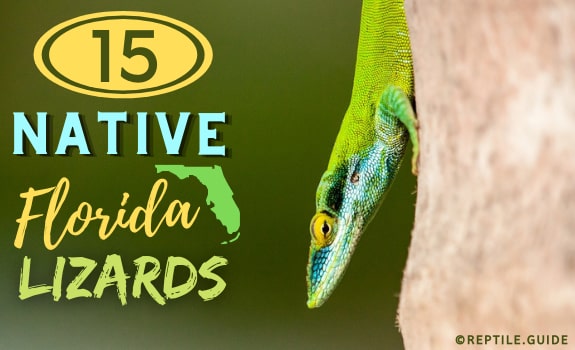 Anyone that’s ever been to Florida knows that its hot and humid sub-tropical environment is a mecca for exotic reptilian species, including lizards and chameleons (which actually also are lizards).

Did you know that the Sunshine State is home to over 60 lizard species?!

Perhaps even more surprising than the sheer number of species is that only 15 of those are actually native.

Many of the most common Florida lizards (some of which also live in other places in the U.S., like brown anoles, green iguanas, and geckos, are established invasives.

Some of native lizards in Florida are quite hard to track down, but they’re the real gems of this tropical paradise. 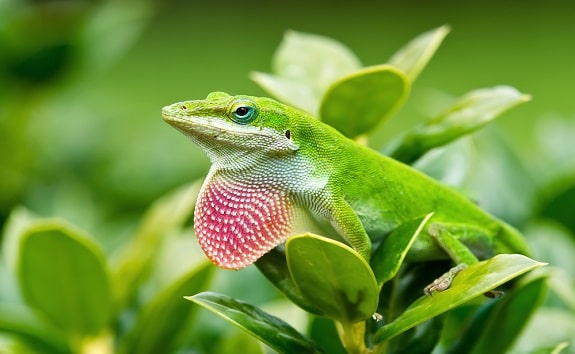 The Green Anole, also known as the Carolina Anole or the American Anole, is the only anole species native to Florida. But you can find it in other places throughout the Southeast US, even in Texas.

Their brown, invasive cousins are far easier to find, but these green gems certainly stand out, especially when the males flash their bright red dewlaps.

This species is highly territorial, and males can often be seen chasing each other away and exhibiting threat displays.

In captivity, they can be cared for really well – if you know how to do it. 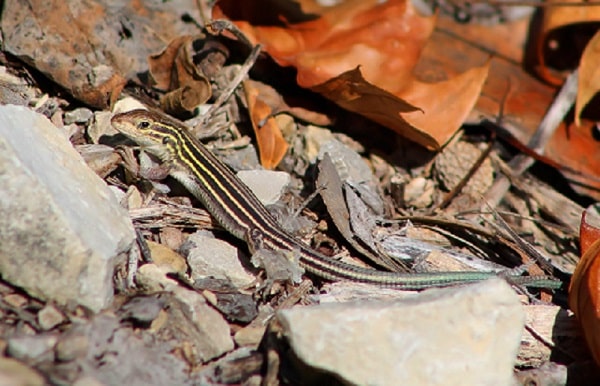 The six-lined racerunner is native to much of the southeastern United States. There’s even a small, isolated population in Michigan.

It’s an incredibly shy and speedy little lizard, reaching speeds of up to 18 mph when it flees.

Like anoles, this species actively hunts for insects during the daytime. 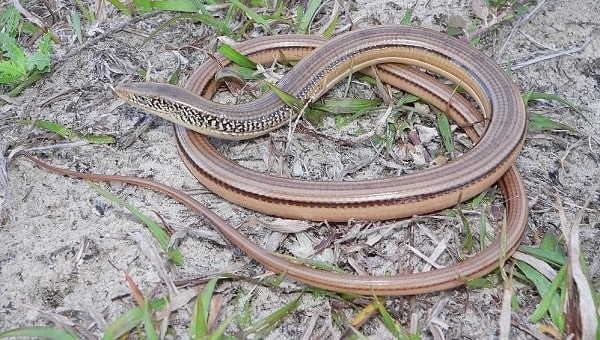 Description: Legless, tan base color with black down the sides and yellow and black speckling on the sides of the face, looks like a snake with eyelids and ears. 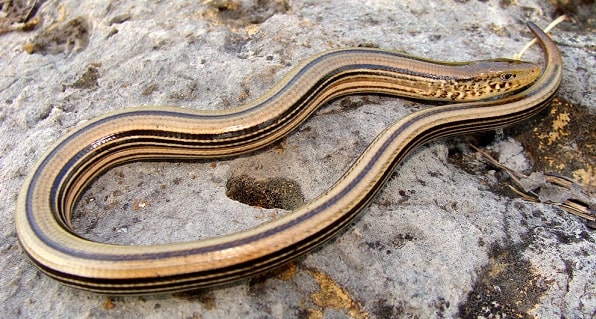 Description: Legless, brown or black with yellow lengthwise stripes of varying lengths, looks like a snake with eyelids and ears.

The Slender Glass Lizard is typically thinner than its other legless cousins and features dark speckling down the entire lower sides of its body. 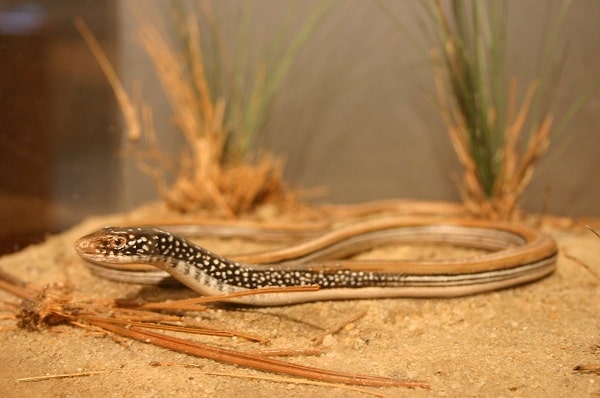 Description: Legless, shorter than other glass lizard species, bronze with yellow and black stripes and speckles, looks like a snake with eyelids and ears.

This species may be distinguished from other legless lizards by the dark stripes running down the lower half of each side of its body.

Unlike other glass lizard species found throughout Florida, this species is only found in the Florida panhandle. 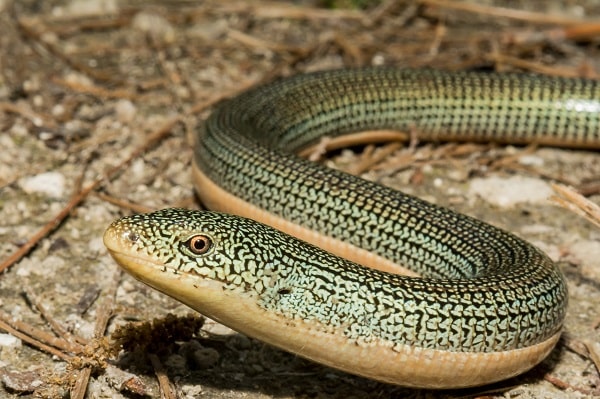 Description: Legless, light brown to black with green and yellow speckling, looks like a snake with eyelids and ears.

Unlike its cousins, this species has no lengthwise stripes on its side or back. Instead, it has a series of irregular white vertical lines behind its head. It is the longest glass lizard species in Florida. 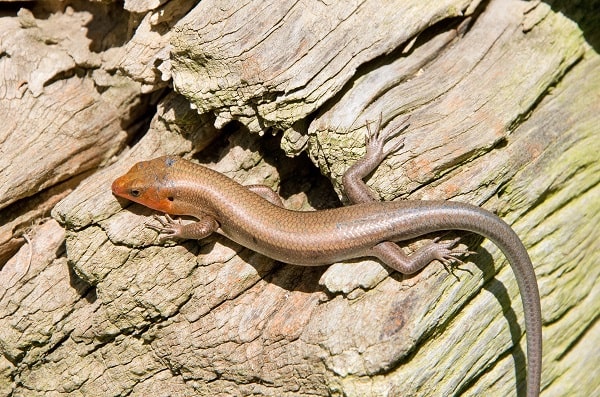 This elusive species is an uncommon find in its minimal range of the Florida panhandle and several isolated populations scattered around the eastern half of the United States.

It’s classified as a species of least concern by the IUCN, and it is poorly understood and not well-studied.

They prefer humid habitats along bodies of fast-moving water. They’ll hide amongst rocks, leaf litter, and vegetation, then dive into the water if detected.

This is an insectivorous species that’s active during the day. 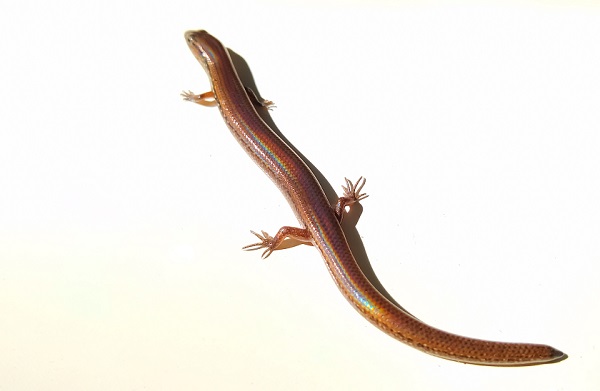 There are currently five recognized subspecies of mole skink. They are:

This species is entirely terrestrial and even semi-fossorial. They never climb, but they can be found hidden under rotting logs, leaf litter, and burrowed into dry, loose soil.

Instead of running, they “swim” into the sand to safety when they encounter a threat. They were named after this very mole-like behavior. 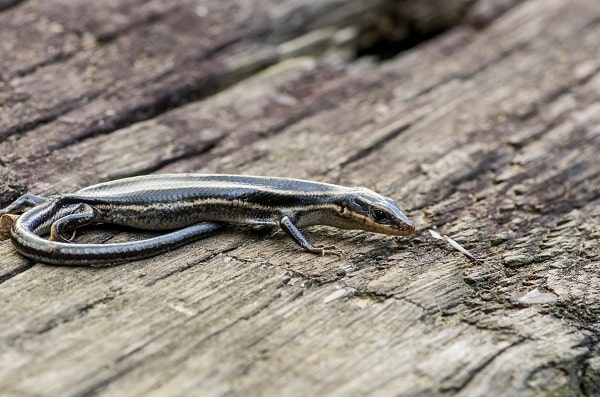 Description: Brown with five light-colored stripes running down their body, juveniles have a blue tail, and adult males have an orange head.

The common five-lined skink is not picky about its habitat. It can be found in almost the entire Eastern half of the United States, and it’s equally at home on the ground or in trees.

The males of this species are highly territorial to other males, while the females exhibit surprising levels of maternal care, including using their bodies to regulate the temperature and humidity of the eggs, retrieving displaced eggs, and consuming rotten eggs so they don’t affect the rest of the eggs. 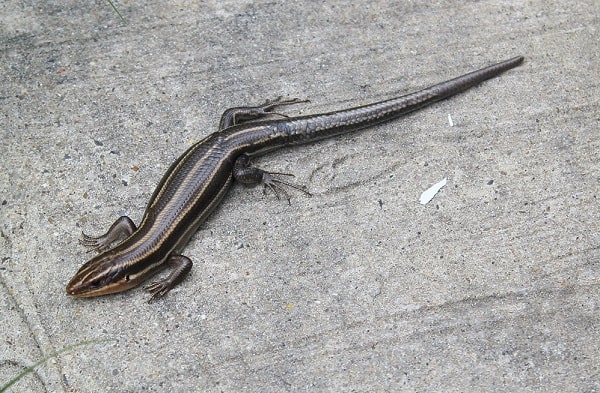 Description: Brown with five light-colored stripes running down their body, juveniles have a blue tail, and adult males have an orange head.

This species is quite similar to the common five-lined skink.

The main difference in behavior is that this species tends to inhabit dryer habitats like pine forests, whereas the common five-lined skink prefers moist wetlands and woodlands.

As their name suggests, they can only be found in the southern portion of the eastern United States. 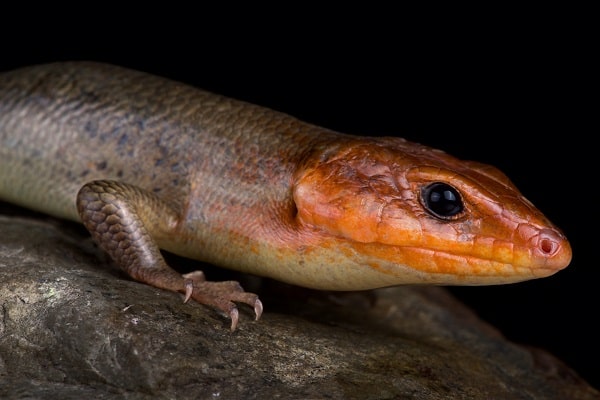 While still commonly found on the ground, the broadhead skink is the most arboreal skink in Florida.

Like other skinks, the broadhead skink’s diet consists primarily of insects. Thanks to their large size, though, they often overpower and consume other small lizards and even mammals. 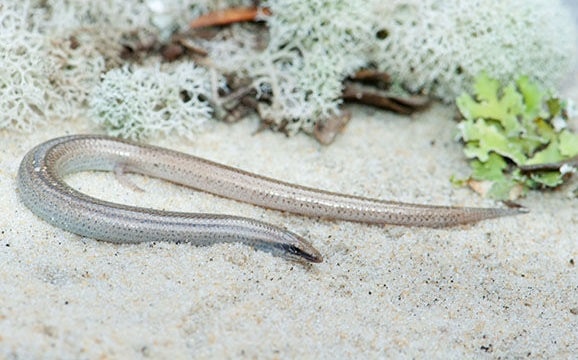 This is undoubtedly the most unique skink species in Florida.

Their small, white bodies that evolved to blend in with the sand certainly make them stand out from the more drab, woodsy-colored skinks.

Their legs are so tiny that they’re barely visible. At first glance, Florida sand skinks look like little snakes.

They spend almost their entire lives buried 2-4” beneath the surface of the ground. 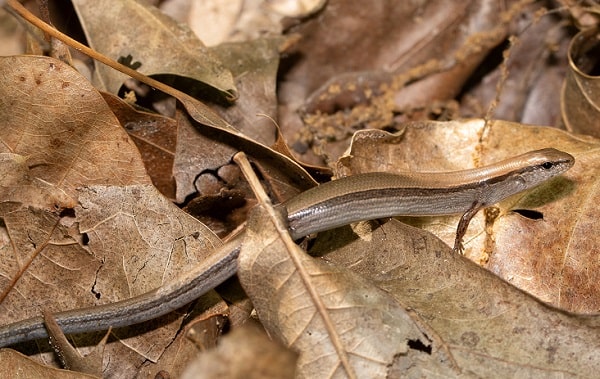 Description: Short legs, copper brown with a black stripe running down each side of their body

Habitat: Areas with loose soil and plenty of leaf cover

This is another skink species that virtually never climbs and, instead, “swims” into the soil to escape predators.

It’s the smallest species of skink in the eastern United States.

Female ground skinks display no maternal behaviors and abandon their nest as soon as they finish laying their clutch of 1-6 eggs. 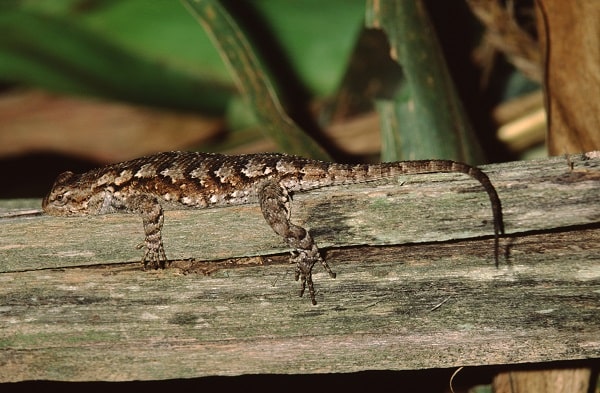 This species is highly arboreal, often fleeing to fences, shrubs, and trees at the slightest sign of danger.

Like all other lizards in Florida, the eastern fence lizard is insectivorous.

They’re a common sight in their native range but undoubtedly challenging to catch!

Males exhibit “push-up like” behavior to attract their mates.

Description: Gray or light brown with one dark brown stripe down each side of its body, males have blue on their throat and belly, body type similar to an anole but with semi-rough scales.

These Florida lizards are most commonly found in the Ocala National Forest, but their population is declining due to habitat loss. They’re classified as Near Threatened by the IUCN.

The segmented populations have been separated for so long that they’re genetically different. The four main Florida scrub lizard populations are located in:

If you want to learn more about lizards and the different kinds there are, read here!