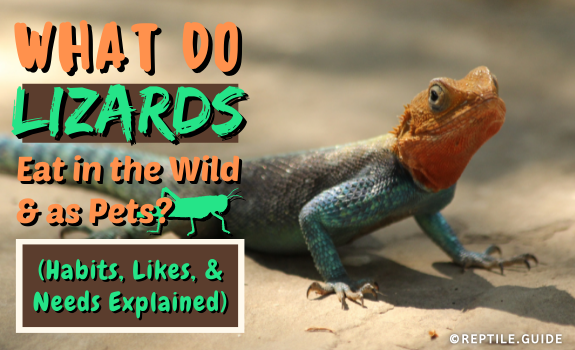 People have been asking “What do lizards eat?” for centuries, and the theories have included things as outrageous as human hair and the souls of the dead.

Fortunately for us, the truth is a lot simpler and less grotesque. This article will take a closer look at the answer to the question, and leave you without doubts.

What Do Lizards Eat – In A Nutshell

Lizards typically eat smaller animals and, in some cases, flowers and leaves. However, the answer is a lot more complicated, and some lizards are quite voracious.

In the following segments, we’ll answer the questions:

What Do Lizards Eat In The Wild?

What do wild lizards eat?

Omnivorous lizards also exist and some species live on both meat and plant matter.

That’s not to say that herbivorous lizards don’t exist though. In a few exceptional cases, lizards eat plants.

Another question we see often is, “What do baby wild lizards eat?” Typically, they eat whatever their parents eat but in smaller amounts.

For instance, a herbivorous baby lizard will feed on the native plants in an area. A carnivorous lizard’s young will eat insects and other small animals. Omnivorous lizards’ babies eat both.

Let’s take a closer look at what lizards of each type might munch on in the wild.

Carnivorous lizards mainly eat live prey or other proteins like:

What Do Pet Lizards Eat?

Captive lizards have similar needs to their wild counterparts. However, your pet lizard’s diet is largely dependent on what you can provide.

Your pet lizard may be a carnivore (meat-eating), herbivore (plant-eating), omnivore (eating both meat and plants, or insectivore (eating only insects).

Let’s take a closer look at a few examples of each of these types of pet lizard species.

Carnivorous and insectivorous lizard species include:

Some of the most popular species in captivity are omnivores, including:

Pet omnivores usually eat a diet that combines these two things. Check out our bearded dragons’ feeding guide for an idea of how that works.

How Do Lizards Eat Their Prey?

Lizards have a somewhat unusual eating method since their mouths and throats don’t work like those of mammals.

To compensate, the area below their eyes is soft, allowing these animals to force food down their throat by pushing their eyes and other organs against the top of the palate.

A lizard doesn’t chew either. Instead, they swallow their food whole. They also swallow stones and pebbles (gastroliths) which slosh around their stomachs and break food into smaller pieces.

Some lizards, like the monitor lizards, have a series of modified vertebrae around their throats. These bones help squash food down and break down large prey items.

If you’d like to know how lizards catch their prey, the answer is that there are two methods:

How Do Lizards Eat Their Skin?

When they shed, lizards like crested geckos and house geckos usually eat their discarded skins. This allows them to consume all the nutrients that they put into creating the skin.

While you may sometimes see a lizard eating its skin after shedding it, they usually eat it while shedding.

If your lizard is unable to eat its skin while shedding, it may consume it afterward – in a single sitting.

While it sounds disgusting, many micronutrients needed for skin formation are hard to come by, and eating their shed skin helps prepare the lizard for the next skin formation.

When Do Pet Lizards Eat?

Pet lizards typically have scheduled feeding regimes. Most lizards don’t need to eat every day, but it depends on the species.

Bearded dragons need a daily meal, while most pet lizards only need three or four meals a week.

It’s up to you to research your specific species of lizard and ensure that it gets enough food.

Many lizards do poorly in captivity because they don’t get the right type of food. Other lizards get too much food which leads to obesity and heart problems.

We recommend getting veterinary advice to help you manage your baby and adult lizards’ diets.

Once you know how often your pet should eat, try to set a fixed schedule so they know exactly when their next feeding will be. This helps their systems to function properly.

Where Do Lizards Eat?

Your pet lizard differs significantly from wild lizards. Most wild lizards eat wherever they happen to be when they find food.

If a wild bearded dragon comes across an edible plant, it simply munches down. However, pet lizards lose many of the instincts that protect them in the wild.

A wild beardie will naturally climb into the plant to prevent it from swallowing soil and getting an impaction. It also knows what to eat to clear its system if it does get impacted.

Pet lizards don’t have a wild pharmacy that they can choose from. Your pet lizard should eat out of a food bowl or from tongs.

By offering specific feeding locations, your lizard knows where it can find food and is safe from disasters like impactions and some types of parasites.

What Do Baby Lizards Eat?

Baby lizards eat the same things as larger lizards, but in proportion to their body weight.

In omnivorous species, the young often eat more meat than the adults. This is because they need more protein to fuel their growth.

What To Feed A Baby Lizard

When trying to figure out what to feed baby lizards, you need to know what kind of lizard they are. Young lizards eat the same foods as adults of their kind, but in smaller amounts.

Of course, baby geckos are more likely to eat wingless fruit flies than full-grown crickets, as are chameleons.

Once you know what kind of baby lizard you have, you can identify a proper diet for it.

Pro Tip: No matter what kind of lizard you have, always provide a varied diet. Providing only one or two types of food can lead to nutrient deficiencies.

Do All Lizards Eat Insects?

While many lizards that we keep in captivity eat insects, not all of these animals do.

Related Species And Articles To What Lizards Eat

If you’re interested in other lizard-related articles, have a look at:

You can also check out our other articles on lizards in general – we have vital guides that you can learn from!