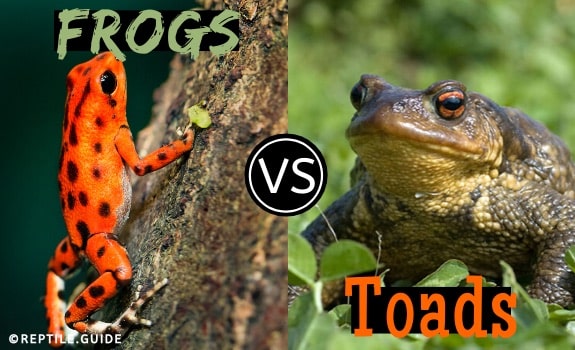 Toads have bumps, right? And frogs are smooth. Perhaps this is how you were taught to tell the difference between a frog and a toad. Wouldn’t it be nice if it were actually this simple?

That way if a bumpy creature hopped across the trail in front of you, you would know with confidence what to call them (opens in new tab).

In this instance, is it a toad or a frog paying you a visit?

Unfortunately, as you’ve probably picked up by now, bumpy skin alone is not an identifying feature for toads.

So, what exactly are the differences between a toad and a frog? Well, in reality, nothing.

Scientifically speaking, toads are frogs are not classified into specific taxonomical groups.

However, in casual settings, distinctions are made between the frog and the toad with the idea that all toads are frogs but not all frogs are toads. Toads have unique features that make them distinct from the main frog category.

Clear as mud? Keep reading to find out what makes a toad a toad and not just another frog.

As noted above, frogs and toads are often over-simplified into categories of bumpy or not bumpy skin. However, at first glance, some frogs with bumpy skin look like toads!

An excellent example of this is the South American Horned Frog, also called a Pac-Man Frog. This fellow is large and stout with bumpy skin. Yet he is most definitely a frog and not a toad.

The Pac-Man Frog, like all other frogs, moist-looking skin. If you hold one, they will usually feel a little slimy. This is due to a waxy secretion that keeps their skin from drying out and even acts as a microfungal and microbial layer to keep them healthy.

While the skin has this smooth look due to its moisture, that doesn’t mean it can’t have bumps! The Pixie Frog is a perfect example of this and can easily be mistaken for a toad because of its bumpy looking appearance.

The same goes for the Gray Tree Frog, an obviously bumpy little fella, who still produces the slimy mucus only frogs have.

The smoothness of a frog comes from the sheen of moist skin.

In contrast, a toad’s skin is drier, wartier, and more waterproof, indicating their preferred habitat along fields, in woods, and in gardens.

This adaptation means that the toad can live in drier locations whereas the frog must live near damp locations.

If you are lucky enough to see a toad or frog laying eggs, this will definitively tell you which amphibian you are viewing.

A toad lays its eggs in long strings or lines. They might possibly be wrapped in the tall grass around a body of water or over some leaves. This makes them very hard to spot.

In comparison, the frog lays its eggs in large, round clusters on top of the water’s surface. They are much easier to see.

And if you peer closely you’ll see black spots, which are the embryos inside the eggs. This translucency allows the embryos to gather more heat from the sun.

Another tell-tale sign they are frog eggs is if there is a male frog hovering nearby. In some frog species, it is the male’s job to guard the eggs.

On the contrary, the toads abandon their young trusting that their offensive secretions will be enough to repel predators.

Frogs tend to be nimbler than toads (like the African Dwarf Frog). This gives them a body that is longer and leaner, enabling them to move quickly both in and out of the water.

When their hind leg is stretched to full length it will be longer than the head and the body combined. The frog, therefore, has the ability to take leaps farther than the length of its own body.

On the flip side, toads hardly look like athletes. They have stout bodies that are used more for crawling than the long leaps associated with frogs.

Their legs are generally not longer than their bodies and they tend to prowl around on the ground instead of jumping from one location to the next.

Body shape is more of a generalization for toads and frogs and is one of the first thing people look at when deciphering whether an amphibian is a toad or a frog.

In some cases, like the Pac Man frog, it is hard to tell which necessitates other features (such as skin’s appearance) needing to be studied.

⭐️Fun Fact: Chance is, you probably don’t know how frogs are able to jump so high. Well, until recently scientists didn’t either! That is until a study at Brown University found that the tendons within their legs coil up like springs and launch them into the air similar to that of a catapult.

Note: It’s important to acknowledge that because frogs and toads are essentially the same creatures, their similarities are far beyond what can be encompassed in this article.

However, with this being said, below are 3 key similarities everyone should be well aware of!

For the science nerds, all frogs and toads fall under the same taxonomical classification. The taxonomical hierarchy looks like this:

From here, the family category can be either bufonidae (true toad) or ranidae (true frogs). While this implies that true toads are a family of their own, they still fall under the category of frog.

What this means for the layperson is that after eons of scientific research, the powers that be have determined that biologically frogs and toads are the same species. This means that they have more in common than they don’t.

Toads and frogs both have glands that give off secretions. These glands are located primarily along the head and back, but the kind of secretions they give off can vary…

Both toads and frogs give off secretions that can range from off-putting to poisonous. This helps repel predators.

Water-loving frogs will have more mucous secretions that dry land frogs and the same is true for toads.

Frogs and toads both shed their skin periodically and then consume it to remove any trace that they were in the area. This is called dermatophagy.

This very phenomenon is also what is believed to allow frogs and toads to reabsorb nutrients and to keep the permeable nature of the skin by preventing it from becoming hard or rigid.

To date, there are NO known venomous toad species. However, there are two known species of venomous frogs, Bruno’s casque-headed frog, and Greening’s frog.

Both frogs are found in the Brazilian Caatinga scrublands and have skull spines that inject venom into their victims. These frogs will cause you A LOT of pain but are not usually lethal to humans.

Both frogs and toads have similar feeding habits.

Since they are found on every continent except Antarctica, their habitats are extremely varied. This means that their diets are also varied, but what is consistent is that the frogs and toads eat a carnivorous diet.

Some frogs have teeth called maxillary or vomerine teeth that help hold the prey still. These teeth are only on the roof of the mouth and do not function for chewing capacities.

Another similarity is that frogs and toads tend to swallow their food whole.

Since food is not masticated or chewed, the size of the prey depends on the size of the frog. They are typically known for catching flies out of the air, but these are not the only things frogs and toads eat…

However, it might surprise you to learn that the largest frogs and toads will eat small mice, baby turtles, small frogs, and baby snakes!

Additionally, many frogs and toads will starve even if they are surrounded by dead insects because they NEED to sense motion to understand that what surrounds them is food.

However, many frogs kept in captivity have adapted to eating fresh-killed or preserved food.

Wrapping Up Toads Versus Frogs

Frogs and toads are the same species and therefore have more commonalities than they do differences. However, by identifying toads as a sub-group the average person can easily narrow down or identify species they find in the wild.

The common attributes, like dry skin and short legs, give a clue to the amphibian’s behavior and natural habitat.

Frogs and toads have many fascinating overlapping qualities. For example, they both absorb water through their bellies in an area called the “drinking patch.”

They both use their eyes to swallow, which is why you may see them blinking hard when they eat.

With the exception of a few toad species that have live births, they both take between seven and 10 days for their eggs to hatch into tadpoles, at which point it’s very hard to tell them apart until they get a bit older.

Whichever amphibian you are observing, they are guaranteed to entertain you with their fascinating behavior and intriguing qualities.

Read on to learn about the differences between alligators and crocodiles (and how surprisingly different they are).

9 thoughts on “Frogs Vs. Toads: 6 Key Differences & Similarities Everyone Should Know…”